What's Been Going On

That's not a question.  I just wanted to show you a bit of what's been going on.  First, the small fry: 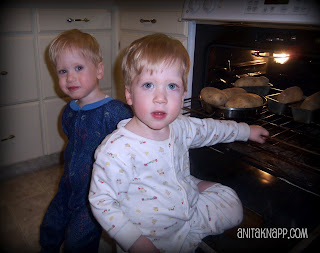 These are potatoes that they decided to bake in small loaf pans.  They had a great time playing "put" with them.  Put the potatoes in the pans, put them out.  Put them in the oven, put them out.  I thought their daddy was in the kitchen with them, so I was pretty surprised to walk in and see them sitting on the cold oven door like this.  Gotta be more careful with keeping the oven off-limits, I see.

And now the Angel: 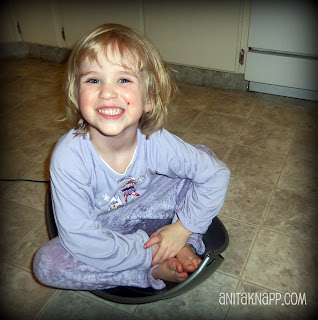 She was sitting in a rounded lid to an electric griddle, spinning around and around while the babies baked their potato loaves.

And then I found this downstairs: 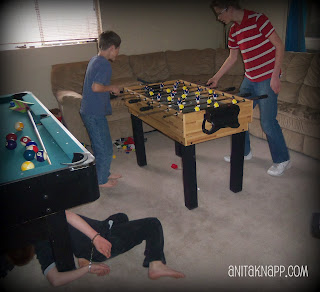 Isn't it nice when the brothers can foosball so nicely together?  But wait, check out the lower-left corner of the picture.  Yes, that is a boy handcuffed to the pool table.  I found out later that he had asked to be cuffed that way, as he was trying a Houdini-like stunt.  But it makes such a great picture!

And this is what has been going on at our house today.