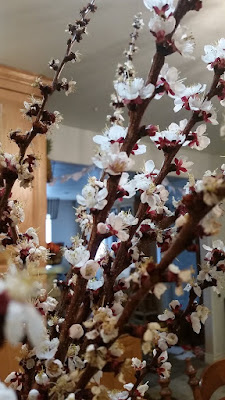 It's finally springy around these parts!  We forgot to prune the apricot tree in late winter like we should have.  No matter - we'll prune it now by cutting off all the wild water sprouts and bringing them inside to enjoy!

As a child, I remember singing about "popcorn popping on the apricot tree" in the springtime.  My children still sing the fun little song.  Its true - the blossoms really do look like popcorn all over the tree.  And now we have popcorn branches on the counter, where we will keep them until the blossoms fall and we have snow all over the place.  Hmmm... spring turning backwards into winter?  Odd. 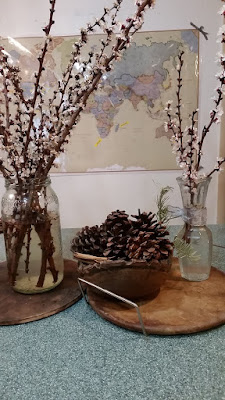 Email ThisBlogThis!Share to TwitterShare to FacebookShare to Pinterest
Labels: nature

I was too tired to do a big Easter this year.  I didn't do Passover or Easter egg hunts or coloring eggs or even Easter dinner (we had Easter tacos).  Trent, remembering the big Easter celebrations of his childhood, put together some Easter baskets for the kids with random stuff he had on hand.  I am always amused to see what random stuff he can pull out of his sneaky hiding places!  I did get Angel a new dress, because they were at the store and she is so cute.  After church and before we started getting dirty making Easter tacos (I think that should be a new tradition... wait, Sunday tacos IS our tradition), I pulled one of the boys outside to take a quick snapshot of our Easter dresses. 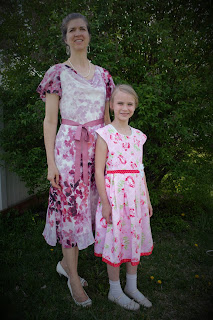 We posed for about 20 seconds before we realized we were standing in an ant nest and they were crawling all over our legs. 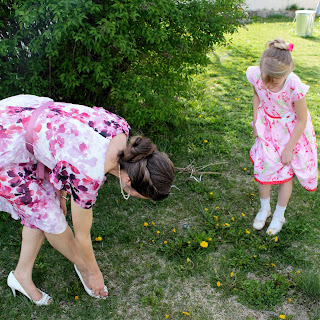 Today has been a busy day.  I gave Chris some pointer on the biscuits he was making for breakfast.  I won't say I helped him, because he did a great job solo!  I led a great family discussion about how to handle kitchen cleanup when Ben and Chris move back home for the summer.  And then I helped clean up the kitchen.  I don't mind cleaning up when I didn't have to make the food - Trent and Chris made a fabulous team for biscuits and gravy this morning.

I helped Angel sort through the dresses in her closet.  She has a dozen of them, but only wears two.  We pared down a few, and she remembered some that she just loves - maybe they will see more wear time.  Or we can pare down a few more.

I assembled a shelf, with the help of four additional hands, and figured out where to hang it.  Trent is better at the power tools, so I let him hang it on the wall.  I also located a spider in the bathroom sink and allowed him to kill it for me.  See how nice I am?

I supported a neighbor's moving sale and toured their house.  I'm now fighting a touch of envy because it is bigger and five million times better laid out than the one I live in.  I wish I could buy it.

I sent birthday wishes to a brother-in-law.  I texted a list of shopping items my dad has requested to my sister-in-law.

I held a six-year-old on my lap and consoled him when everyone else got to play with a toy but he didn't.  I later convinced the other one that he would not die if he ate the gravy.  A bribe of chocolate milk didn't hurt there.

I taught David about pedal markings in piano music and how to properly use the sustain pedal.  He is teaching himself to play "Chariots of Fire."  I admire his dogged determination to do things he sets his mind to.

I had a discussion with Eddie about "fair," and complemented him for getting right on his chores.  He is the best one we have to get started without being asked.

I can't take a nap yet, because I still need to have an executive council meeting with my fabulous husband and send an email to my brothers.  And lunch - it's about that time.

I wonder what the afternoon will bring?
at April 15, 2017 No comments:

A couple of months ago, Trent and I had a little weekend getaway.  As we were driving around the city, we stopped in at a historical society museum and looked around.  I've always been drawn to old things and historical stories, so I could have easily spent several days there.  On every wall hung portraits of people long since gone.  Posed family portraits, individual faces mounted behind rounded glass, formal wedding pictures, stiff groupings of social events...  The old photography rendered their bodies still and their faces grim.  Rarely did I see even a flicker of a smile. 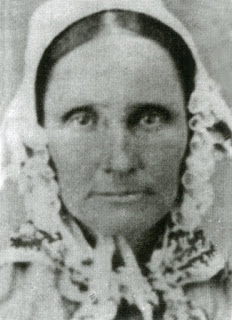 I wonder who these people are, and what the occasion was for them to have a formal portrait taken.  Was it in joyous celebration of a life event?  A memento for a too-distant loved one?   I'm sure their expressions wouldn't have always looked so grim, but that's how I always see them portrayed.

I know some of their stories, and I've read of hardships that my own ancestors faced.  It seems, in the histories, that they often went from one trial to the next.  Tranquility doesn't make good plotlines.   I'm sure they triumphed, and rejoiced, and had happy times - I wish I knew more about those.

Late at night, I often feel like I have pioneer face.  It's harder to feel happy when I am tired, and my challenges seem to grow ten sizes after the sun sets.  Maybe when I feel my mouth fix into a grim line, and my eyes start to stare coldly, I'll have to imagine a pioneer party.  They made it through their trials - so can I!

This is my ancestor Eunice Reasor Brown, born in Kentucky in 1808.  She birthed nine children, buried a two-year-old and a three-year-old, and adopted a Native American boy who was sold to her by his family.  She accompanied her husband in an army battalion during the Mexican War, and helped him build a new city out of arid nothingness.  She accomplished so much in her 50 years - so can I!
at April 12, 2017 No comments:

Email ThisBlogThis!Share to TwitterShare to FacebookShare to Pinterest
Labels: histories 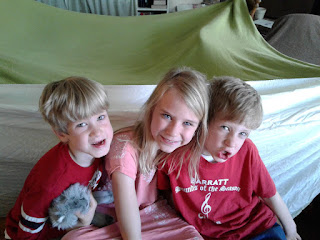 It's Spring Break around these parts.  It is a Very Important Week, and that is why I capitalized it.  Actually, for the kids it probably should be written SPRING BREAK!  With probably a dozen or to exclamation marks and a random assortment of silly face emojis.

We aren't able to go to Disneyland or even camping this year,  but we thought we'd make the most of it at home.  Today, we built tent forts in the back room.  Yes, they do want to sleep there, so sure why not go ahead and have a tent fort slumber party.

I mopped the kitchen floor and made it cry in happiness because it has been so long since it got an all-over, proper mopping instead of a quick wipe here and there with a washcloth under my foot.

Yes, of course we went to the library!  I figured that if the kids had some books to read, then we could have some nice quiet time without anyone punching anyone else.  Not that we ever have punching.  And I even picked out a few nice books to read.  They have nice covers, but I don't know if I'll actually have time quiet enough this week to open them.

Spring was calling, and since the weather is so delightful, we went to a park.  We have lots of parks in town, so it was fun try out a new one.  I walked laps around the park while the kids played, mostly because although the sun was warm, the breeze made it a bit too chilly to sit and watch children play.  And there playground was a touch on the small side for tag-with-Mom.  Assuming that I like tag, which I don't.  I have accepted the fact that my children play very nicely at the park without me needing to hover over them, so I don't.  We all got some exercise, so that was good.

After all that running around, everyone was hungry.  Opa was in particular hungry for a hamburger, so we went out for burgers.  No, dear children, we are not going to the place with the play place inside.  The noise and commotion would do your Opa in.  And likely your mother and how would you even make it back home then?  We went to the drive through, then back home with our burgers and fries, while they were still hot.  Cold fries are not great.

Freddie needed a little special attention, so while everyone started on their books, I took him to Costco for a mother son date.  He loves the taste tables, and I was able to pick up another big pillow bag of spinach and a dozen other things I didn't know I needed until I got to the store.

I made macaroni and cheese for dinner while sipping on my green spinach smoothie.  I like to be good and healthy, but the kids need some fun dinners this week.  Everyone is cooking - or helping - one night this week, and Georgie wanted mac and cheese.  He helped... some.  I didn't quite have it in me to make the boxed nuclear-reactor-fluorescent-orange stuff, so I made it from scratch.  They wolfed it down and proclaimed it "best ever!" Even thought I made them eat vegetables too.

Monday night is family night.  Zig Ziglar said, “Your family is designed for accomplishment, engineered for success, and endowed with the seeds of greatness.”  We are totally awesome that way (seriously, I believe all families hold the seeds of Heaven), so we are taking the 7 Day Ziglar Family Challenge to improve our family.  We watched the first video, put on by Dr. Gary Chapman of 5 Love Languages fame.  (I'm not fancy enough to be an affiliate, but I'll link to it if you are interested in trying it out.)

Whew.  What a day.  But I think they had a good Spring Break.  What?  Spring Break is this whole week?