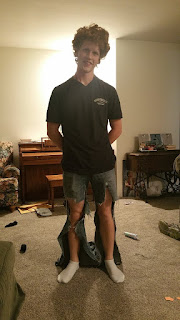 Growing up, my brothers and I wore jeans a lot.  We wore them until they were "high waters" or until the waist was so tight you couldn't sit down in them anymore.  Then you passed them on down to the next kid (who was obviously delighted to get another batch of hand-me-downs, of course!).  That didn't actually happen very often, because we always wore out the knees first.  I don't know why we think of denim as being so tough when the knees rip through so fast!  I say that as a mother of boys.  I do remember my mother getting Tough Skins jeans at J.C. Penney - or was it Sears? - because they had a double layer of fabric at the knees.  To her, it was worth it.

When my first little boys were getting bigger, Shop Ko had a return program that if the kids wore out any clothing before they outgrew it, the store would replace the item.  I would drive several cities away to get Shop Ko jeans for my little dudes, even though they were noticeably thinner than the other brands.  I went back to get those holey jeans replaced over and over and over... until I got sick of it and quit shopping there.  Boys are HARD on jean-knees!

When our knees blew out, the jeans were candidates for cut-offs.  Mom would cut the jeans off at the knee-hole.  Hopefully the holes in both knees lined up.  If we were lucky, she would hem the cut ends, or we would just roll them up.  Those were our summer shorts.  But we did not wear them with holes in the knees.  Not at all.

As I'm getting to be an old-lady-person, I'm surprised at the jeans on the racks at the store that are pre-thrashed.  First the jeans were pre-washed, then pre-worn-in, and now you can pay good money to have them pre-worn-completely-out?  I have a hard time with the idea.

David had a pair of jeans with holes in the knees.  They were hand-me-downs from Chris or Ben, so they came by the knee-holes honestly.  Usually I take such jeans and add them to my enormous pile of old pants that I fully intend to make denim quilts out of.  One day.  Don't ask how large that pile is (it currently lives in multiple big boxes), or when "one day" is.  But David liked the jeans and kept wearing them.  He even took a razor blade to them and ever-so-carefully WHILE wearing the pants scraped a few new holes in the legs.  This does not compute.

The holes got larger after every washing, and I think after every wearing and every time someone looked at the jeans.  Thankfully, there came a day recently when there was more hole than jean and they were declared legally dead.  Even more fortunately, there wasn't enough fabric left to worry about imaginary denim quilts. 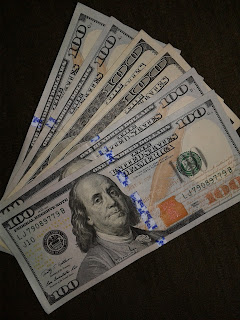 Um, what?  That's an awful lot of money!  When I asked him to tell me more about why he needed money, he explained, "I need sixty cents right now."  Sixty cents... six hundred dollars... I guess I've passed on my zero problem and then some.  Yikes!
at September 23, 2017 No comments: