I'm having some stretchings as a mother.  As my children grow and learn, they naturally grow farther from me.  Baby birds leave the nest.  There isn't enough room in one den for lots of adult lions.  Kids grow up and become their own people, and need their own space.  I hear other mothers pine for their gone children, but I really don't.  I love them to pieces, but I'm so happy for the adventures and growth they are having!  I feel like my heart just grew enough to keep them in it and engulf all the distance between us as well.  It's a weird but not disconcerting feeling.  I love watching them grow - even from a distance.

The best story is all about R. We just had two times bail on us and we came out of the yard of the second house and paused in the path to decide where to go, and a guy came up to the fence and asked where we went to church at. We told him the name of our church and sidled up next to him. Then he asked what time church is at, we told him, and he said, "Oh nice. I'm looking for a new church." So then we took this as an answer to our prayer and taught him. He has a way cool story, he was charged with like treason during the coup back a few years ago, and was supposed to be executed, but some internation group stepped in and saved him, it might have been the UN. So then in gratitude he named his next child Barack Obama, he said, "if it would have been a girl, I would have named her Hillary Clinton." So  yes, I taught Barack Obama about the Restoration, but then he snuck out and went and played in the yard. Then R. was picking up way fast on prophets and all of that and looked at the pamphlet and saw the Book of Mormon and asked how he could get one.

He came to church. It was so cool.


And news from South Africa:

Well, this week has been a blast! We have had some challenges, but we overcame them. One of the biggest things that was a challenge was that we only had two cars in our district when we are supposed to have four. So that meant that my companion and I had to pay taxi service for the two Elders in Sada which is about four hours out of our proselyting day to get them there and back. I'm tired as soon as we start leaving to go there. I just wish that they get their car back soon.
at November 09, 2015 No comments: 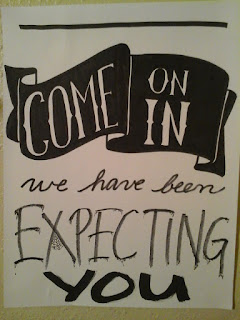 Here is the Halloween sign I scribbled to invite the trick-or-treaters to open the door instead of standing on the front porch.

My dad wanted to pass out the Halloween candy, but he couldn't get up and down to answer the door.  We pulled his recliner to the front door and set him in it with a big bowl of candy on his lap.  The big door was open, with just the glass screen door to keep out the bit of October chill.  It was funny, in a pathetic sort of way, to see the costumed children scramble up the porch steps, ring the doorbell, and stand there awkwardly, staring at my dad and the candy while he ineffectually waved at them to open the door.

But they all love it in the end, treat-passer-outer and children alike.