I just finished giving five haircuts.  I'm not a beautician, by training or imagination or ambition.  But I did learn how to cut boys' hair.  I have a bunch of brothers, and I grew up watching my mother cut their hair.  When I got to be a teenager, I started practicing on the youngest brother, the one who wouldn't mind if he looked like a haystack.  (He ended up looking reasonably decent, by the way, and has no emotional scars that I know of.) 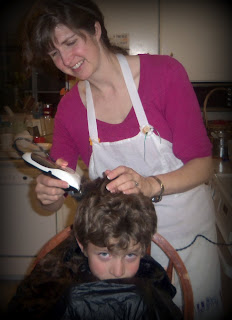 When I went away to college, I took my mother's second-best hair cutting scissors.  I used them to trim my bangs.  At the last minute, I was asked to the Homecoming dance by a sheepdog.  Actually, he was a very nice young man, a friend of mine, whose girlfriend would be out of town the day of the dance, and he needed a quick stand-in for her.  I told him I would go with him if he got a haircut.  He said he would if I did the cutting. He didn't know about my mother's scissors.  I sat him on a chair in grass, in the middle of a dormitory quad, and snipped away.  I did a pretty god job, if I do say so myself.  I have the pictures to prove it, because I did go with him to the dance.

I've been cutting hair ever since.  I don't think it's good enough to charge money for, but with seven sons (and one husband), at least I don't have to pay good money for their monthly shearings.  Let's see... if we could get an el-cheapo haircut for $7, times 8 heads of hair, times once a month for a year...  That's coming up on $3,000! 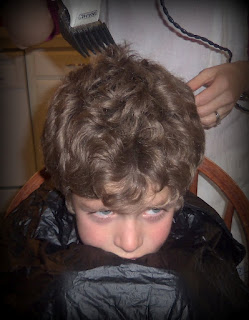 I still have those scissors, and they still work great.  The boys don't seem to mind a home-grown haircut.  Why should they?  They have home-grown hair, after all.  And so much of it, too...
at February 18, 2012

Email ThisBlogThis!Share to TwitterShare to FacebookShare to Pinterest
Labels: DIY