Alec cleaned his room.  I mean, he really cleaned his room.  I was so impressed that I had to sneak down there and snap a picture of it when he wasn't looking.  I won't make any mention of what it usually looks like, except that it has to do with clothing and the floor.  Not bad, especially not for a 17-year-old boy, but not ordinarily this tidy.  It makes me happy to see that he uses the denim quilt I made for him.  It is a checkerboard in the middle, and he has felt checker pieces that fit into the pockets in the corners.  I think it is unique that he has his stereo underneath the bed, and as a bonus, it keeps the clutter from sneaking under there. 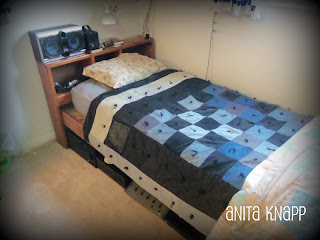 While I was snapping pictures, I thought I'd swivel around and take a picture of Chris's bed on the other side of the room.  When we last switched around bedrooms, (something we do on a fairly regular basis), I was hesitant to put 13-year-old Chris together with Alec, but it has worked out better than I thought it would.  They get along most of the time, and manage to co-exist during the fighting times.  Yes, I had to make the bed for Chris, as he hasn't yet figured out the purpose of sheets.  His denim quilt is in a rectangular log cabin pattern.  The tumbleweed hanging from his light fixture is actually a string of Christmas lights. 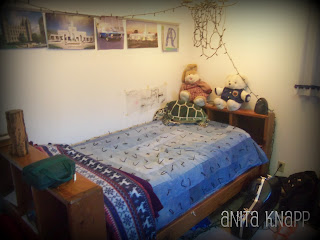 Next is Ben's room.  He is the lucky dog to have his own room this time, even if it is a remodeled second kitchen.  I have a hard time believing how tall they are growing.  Alec has an extra-long twin bed (the footboard of his bed is upside-down, so the sticking-up legs can accommodate the longer mattress), and Ben sleeps diagonally on a queen bed.  He's only 15, but already 6'5", and I think he is still growing.  It's a challenge to keep him in pants that aren't air-conditioned about the ankles.  Ben plays the trombone; Chris is a saxophonist, and they always seem to have an instrument or two hanging around. 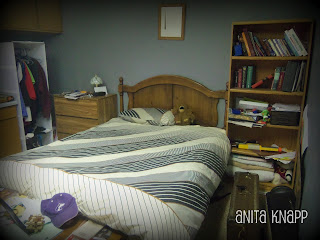 David (10) and Eddie's (8) room is considerably less clean.  We recently un-bunked their beds so they could each have some personal space.  I had hoped that it would end the "That's not my stuff - it's his!" argument that was a perpetual preventer of cleaning up.  Now that each boy has his own side, they somehow feel free to make as much mess as they want to.  The boxes are a threat that if they don't pick up today, I will fill the boxes with their treasures.  I think it's time to declutter in here! 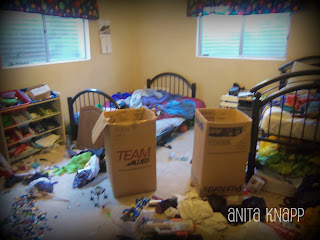 Angel is the other child to have her own room - she's the only girl, after all!  I don't think the boys would like to share a room decorated with pink and butterflies, anyway.  It's not much of a room -  more of an alcove off  the hallway leading to the storage room.  You can see three-quarters of the room in this picture.  I don't know what we'll do when our little three-year-old gets too big for a toddler bed.  I'm not sure that a twin would even fit in here.  We'll worry about that when it comes.  She can make a royal mess of her space, but it's so small that it is easy to pick up at night. 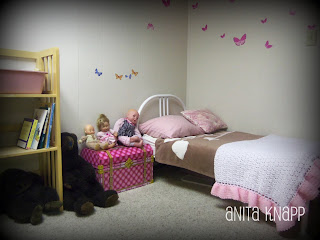 And we're left with the babies.  At 18 months, they are getting pretty big for the crib, but fortunately they still stay in it.  I say IT instead of THEM, because they prefer to sleep together.  The crib rails between the two cribs is down, and they freely climb from one to the other (yes, the beds are secured so they don't slip apart).  Grandma made matching afghans in green and tan for them, and they keep our little ones toasty warm. 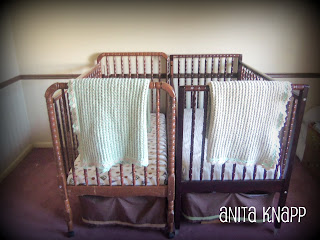 And that concludes our tour of the children's beds.  I will spare you the mess of my room.  Maybe one day I will be able to retire to my room at the end of the day with enough energy left to tidy up a bit before I collapse into the bed.  Until then...  no pictures!
at February 08, 2012