Be Happy In Helping

Eddie brought a box home from cub scouts.  We're having a box derby relay at pack meeting next week, he explained, and I need to make this into a car.  OK.  I filed that thought away with too many other thoughts.  That's code for I forgot about it. 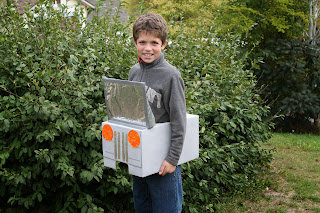 The week flew by, as they do around here.  Wednesday afternoon was particularly busy.  As I started to think about dinner, Eddie came up with the box.  "Alright Mom," he announced.  "Let's do it."  What?  Oh right.  The box for pack meeting.  But now?? 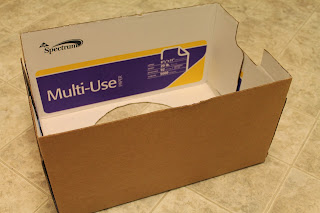 I scrambled to clear the counter while scrambling to clear my thoughts.  I pretty much had to do this project with him.  I could be grumpy and tossing blame bombs, or I could choose to be happy and enjoy some time with my boy.  I chose happy.  It was a struggle. 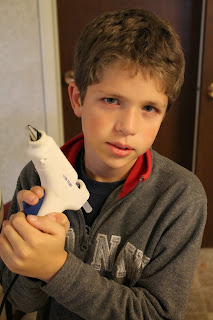 But the more I tried to enjoy it, the more I did actually have a good time.  I really do like creative projects.  And I love spending time with my children.  I don't like feeling rushed, or doing things at the last minute.  But since that is where we were, I made the most of it. 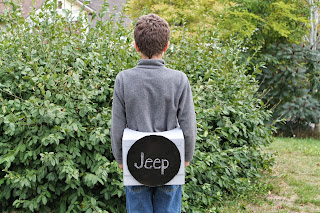 We opened up his box, turned it inside out and reassembled it.  Then we spray-painted it white - with only one coat of paint since we didn't have to cover up the words.  We cut a hole in the top (bottom?), big enough for him to fit through.  He colored the lights while I made the windshield with more cardboard and aluminum foil.  The cut-out circle became the spare tire in the back, and he was ready to go.  He gave me a big hug, his face full of enthusiasm, and said "You're a great mom!  Thanks for helping me!" 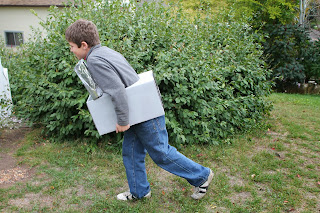 At pack meeting, the cubs sat, in teams of 4, in the middle of the gym.  One member of each team ran  around the gym in stocking feet, then stopped in the middle to get their windshields washed (squirted in the mouth with a spray bottle) by their pit crew (team members).  After the next lap, they needed fuel (team members fed them a cupcake).  The runners were not allowed to do anything but hold their car (box).  After lap 3, they needed an oil change (they were fed a juice box).  After lap 4, they needed new tires (team members changed their socks).  Then the next team member would begin their four laps.  It was a great lesson in teamwork.  The boys had a great time.

Just for today, choose to be happy when you are helping someone - even if it isn't your first inclination.
at October 16, 2013