I went to a funeral today (I've always wondered why the word funeral starts with f-u-n...).  My attendance was required, even though the dearly departed was not a direct relative of mine.  I was asked to accompany a musical number. 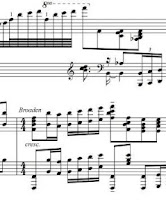 (not the real piece I got, but with a similar amount of little black dots)

The boys wondered why they hadn't given me more time to practice.  Funerals are usually short-notice gatherings, my dears.  I practiced and practiced.  Most of the time it was a four-handed duet.  Or a six- or eight-handed number.  I get lots of help in the music department.  When I got together with the vocal soloist, I was impressed again at what a beautiful, clear voice she has.  And I was depressed with how badly I still couldn't play the music.  I went home and practiced more.

In desperation I begged Trent for some white-out.  Then I went through the song and took out all the extra notes.  There were sure a lot of notes that didn't need to be in there.  Maybe the music was a Rorschach blot test gone awry.  It sure looked different when I was done.  Something like a Jackson Pollock painting, only just in white.