My dad is a model train buff.  He loves 'em.  He is (re)building a model train layout in his garage.  I think this is the sixth or seventh reincarnation of the train, from a layout the could be raised out of the way to the ceiling of the garage, to taking over a couple of rooms in the basement, to a modular layout that could be taken to train shows.  My dad is awesome, and I love his hobby. 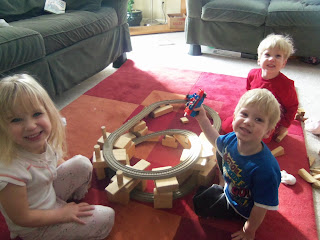 For Christmas, the twins got their own tracks and engines.  With two of them, we can build a layout something more interesting than a simple oval.  See what Trent made for them?  It's a double-decker with wooden blocks.  They love it.  We're training them young, Dad.