We have Family Home Evening (most) Monday nights.  I like to involve everyone, so I give out assignments, but I often run into complaints.  "I had to say the prayer last week!"  "Do we really have to sing that song for three weeks in a row?"  So I made a chore chart.  I had this idea a couple of years ago, but... life trumps crafting. 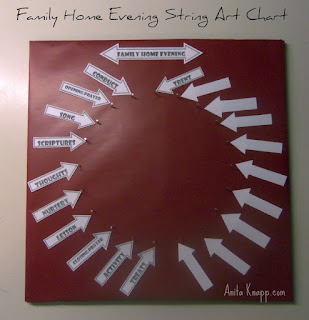 I took a random piece of plywood and had Chris cut it square for me when he was complaining that there was nothing to do.  Then I covered it with red wrapping paper and duct-taped it on the back because I couldn't find the Modge-Podge.  It's here somewhere, I know it is! 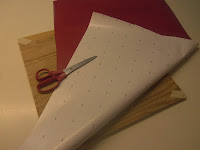 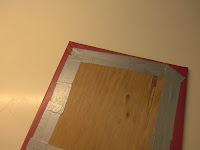 I cut out a circle that was about the diameter of my stretched rubber bands, and marked twenty evenly-spaced dots around the perimeter. 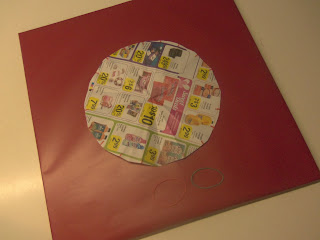 The Angel helped me hammer small nails at each of the marked spots.  She really bad wanted to hammer, and was only partially mollified by handing me nails.  Yeah, I can see her swinging that thing.  Watch out. 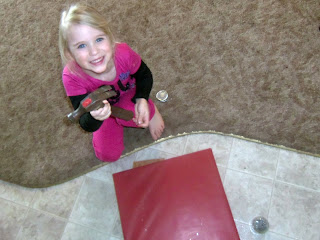 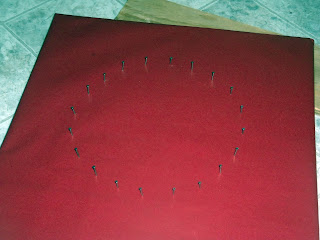 I made labels in the shape of arrows on the computer for each person and each assignment.  I worked much faster now because the twins were up from their naps.  Glad I got the hammering done when I did!  I glued each arrow pointing to a nail. 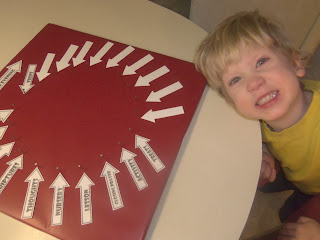 I didn't get a picture of the rubber bands that I strung between two nails: a person and a job.  The whole thing looks like a giant string art.  It's fun and I like it. 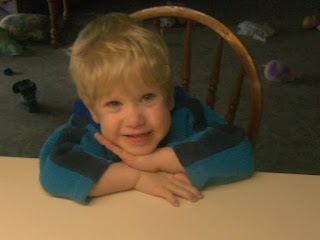 So does Georgie.  Happy kids, and more organized family night!