Sick, still sick.  Well, not sick like I'm contagious sick.  Just sick like "I've been sick for six stinking weeks and I still have this annoying cough and I can't sleep and I'm so weak and atrophied."  Pretty pathetic, I know.  I'll quit complaining now.

But it made me not want to go to the store to get a gift for my adorable niece.  She's also Angel's bestest buddy, so we couldn't just be dorks and not get a birthday present.  And I know myself well enough to know that if I give a rain check, it will never rain.  I'm so bad at getting around to things once I've put them off.  Bad procrastinator, me.  (Or is that a good procrastinator?)

So we gave the little gift the Angel picked out when we were in the store a few weeks ago (a four-year-old is better at forward thinking than I am!  For shame!), and then I made her a hat.  I don't know if she'll wear it, but we sure had fun making it. 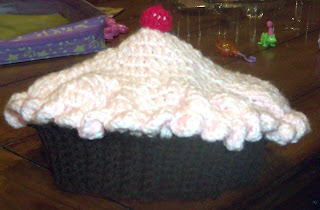 (tried to lighten it so I could see the stitches better)

Yes, it's a giant crocheted cupcake.  That you wear on your head.  But four-year-olds can be silly and cute that way.

We kind of invented it as we went along.  Imagination and a healthy (cupcake = healthy?) understanding of real cupcake dimensions came in handy.  That, and all the cute cupcake hat pictures on etsy.  I say that "we" worked on it because Angel had to try it on every few minutes.  I needed her as my head model so that the finished product would neither be too big and sloppy, not squish one's brains out.  A fine balance, indeed.

I started on the chocolate-brown brim.
With brown, Chain eleven, turn.
Single crochet across - only in back loops (10 stitches).  That makes the ridged look reminiscent of fluted cupcake papers.
Turn and repeat until it is snug (but not tight) when wrapped around head.  I think we did 40 rows?  But it goes fast.
Join last row to first (to make a tube) with sliptitch.  End and weave in ends.

Pink frosting
Double crochet around top edge of brown cupcake base with pink.  (Did I single crochet the whole thing?  It's a possibility.)
Work in a spiral, decreasing evenly as you go to make the domed shape.
End off at the top (when the opening is too small to be able to work in anymore), but leave long ends.

Again, at the top edge of the brown cupcake base, double crochet a pink ruffle.  Work two double crochets in each stitch to make the "frosting" spilling over the edge of the cupcake.  This also hides the joining between pink and brown.

Crochet a "cherry" in red yarn.  I'm really didn't think I could do a sphere, but David cheered me on until I figured it out.  It's not that hard, but I won't deprive you of the challenge.  And I don't really remember.
Add a bit of stuffing to fill it out.  Do this before you close off the end, or you'll be poking stuffing in with a toothpick.  Don't ask how I know.
With a yarn needle, stitch the cherry to the top of the hat, hiding the last bit of hole. 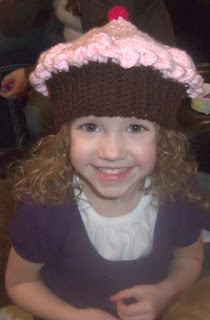 The pink "frosting" looked a little droopy until she put it on , but the grins were about as perky as they come.  What a cutie!