In these last few weeks with Alec, before he ships off to boot camp and his new life with the Army, I really wanted to get some work done.  Partly to keep him busy, partly for him to be helping out, and partly to use his strength and expertise while we could.  So we got the new t.v. as an early Father's Day present, and Alec  had it all hooked up before I could blink twice.

He worked on the dining ceiling repair job and got the sheetrock up and most of the coats of mud.

He helped a bunch on the building of the chicken coop.  I see that I need to update our progress on that project, 'cuz everyone has worked really hard on it. 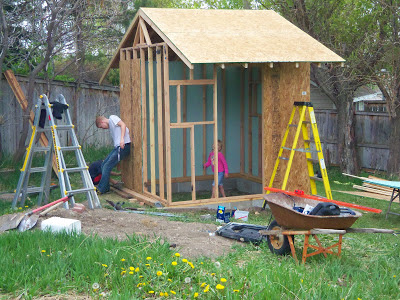 And he climbed in this baby and ripped out some of the shrubbery that has been slowly dying in our front yard.  Only too happy to do that that one!  Demolition is more fun that building, anyway. 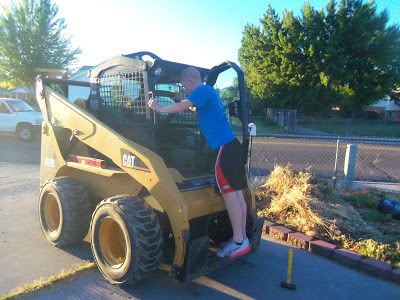 I was happy that he was productive, and happy that we were getting some of these jobs done.  What I did not want was for him to start a job and leave it half-finished.  Sigh.  Sometimes we get what we want, and sometimes we don't.

I'll need to finish the last couple of coats of mud on the ceiling repair.  He had a hard time admitting that he didn't know how to do the finish work, and just left it.  It's hard and tricky work, I know.  I'm glad he learned as much about drywall repair as he did.  Wish I would have done that last bit with him so it could be done. 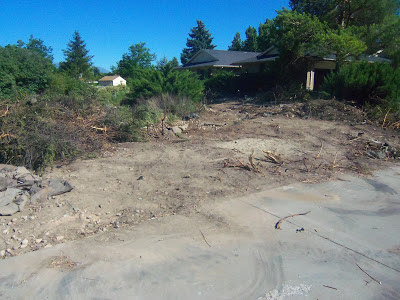 It's a disaster.  Looks like a war zone, with twisted branches and piles of dirt and rocks randomly scattered. A mess.