I got Trent his Father's Day present a bit early.  It's a flat screen tv, and he is thrilled.  Alec got to set it up, and he was literally jumping up and down - in a reserved but very excited tech kind of way.  We thought it would be a good idea to get the tv before Father's Day so Alec could help with it.  There isn't anyone I know who has more of a head for these kinds of things than him, and he'll be leaving soon. 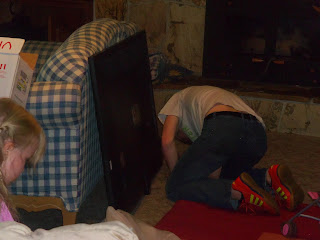 Ben walked in the door after school, talking with Chris.  Ben's eyes flew open when he saw the screen and he made cool, teenager-ish exclamations of delight.  "Chris!  Didn't you notice anything new here?" he demanded of his brother, who was still talking.  "Yeah, I saw it.  A new tv," was Chris's nonchalant answer, but he was grinning.  David and Eddie are "oh yeah" looking forward to having a movie night.  "How about now?"

And the triplets?  I made the box into a playhouse.  I spent about three minutes cutting out a door and three windows (one for each, of course) with a steak knife.  And now I'm the Best Mom Ever.  They've been playing all afternoon - with the remote, the tv, and the box.  You're welcome. 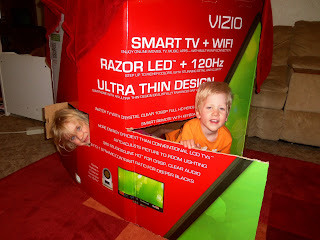 I guess sometimes that's all it takes.  A bunch of money and a steak knife and the Battlestar Galactica they are watching now.  I'm laughing.
at May 28, 2013