I got a new camera for Christmas.  It's nothing fancy, but it was cheap (bought it at the pawn shop!) and it does work better than the old one, whose flash died when I dropped it onto the stone floor.  (note to self: don't drop electronics onto hard surfaces)   Unfortunately, I lost it a few weeks ago, and have been anxious ever since.

I last saw it when I was getting ready to go out for the evening.  It was on my computer desk, and I made a mental note to move it before I left.  Unfortunately, that mental note was neither written in triplicate, nor filed properly.  When I came back home, the camera was nowhere to be found.  Ben remembered one of the babies pointing to it, but he didn't remember where it was.  After a few searches, we gave up.  Trent was sure it had been lovingly placed in the garbage by some pudgy little fingers (which has been the fate of some of their favorite toys before we fished them out).

But now - I found my camera!  It was in a box of papers that were waiting to be filed.  Hmmm.  Maybe I ought to file more often?  But now I can take pictures, with a flash, that might look better than this one: 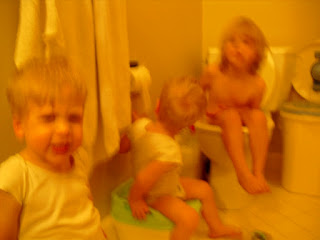 Or maybe it's a good thing the potty-party-picture didn't turn out so well on the old camera...