Remember how I said that I was very sad because I had lost my camera?  And then that I was so happy that I had found it again?  Well, it took a while before I could use it because the battery was dead.  Which meant I had to find the charger.  Then actually charge it.  Then find the cord to connect it to the computer.  Then download the pictures.  You'd think this all shouldn't be too hard, huh?  <sigh>

Anyway, I found some fun pictures of Easter.  Here we have the anticipation of the morning Easter egg hunt.  Eddie (way excited), Angel, Freddie, and Georgie (who don't know what is going on, and don't care), and David (also excited). 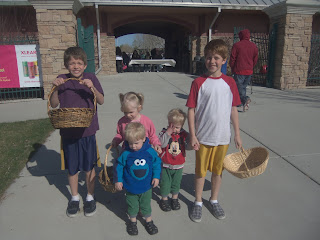 This is how the hunt for the littlest ones went.  Freddie and Georgie spent most of the time picking up a random egg, peering into their bags, and wondering what was going on, while Daddy went bananas trying to collect eggs for them.  We decided that the pay-to-get-in Easter extravaganza place wasn't worth the money or the awful crowds. 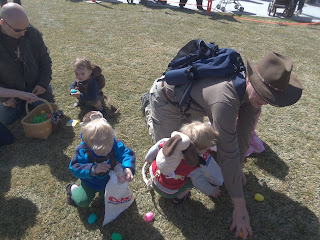 We had another hunt in the afternoon - with family this time.  Now the twins knew exactly what was going on, and what was inside the eggs.  They were more than happy to break them open and eat up the candy goodness! 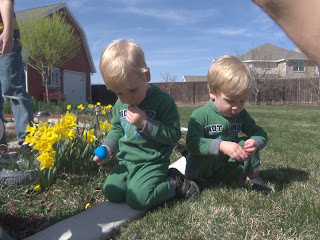 Ben and Chris were very good about helping the twins and Angel find enough goodies to make them all happy (for a small fee, of course).  Alec is evidently too old for all of these shenanigans. 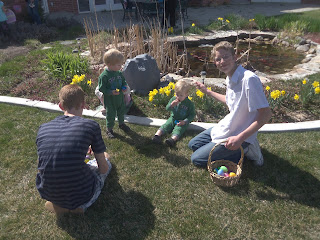 Angel and David had to ride the stone lions in the entryway.  Angel is in love with lions, because Daddy told her a story about Aslan, from The Lion, the Witch, and the Wardrobe.  She had been having bad dreams, and he told her that Aslan would come and scare off the bad dreams.  She was comforted, and convinced that now "Asland" lives in her heart.  "And one day," she often tells us, "I will open my tummy and see my heart.  And I will open my heart and see Asland.  And I will be so happy!" 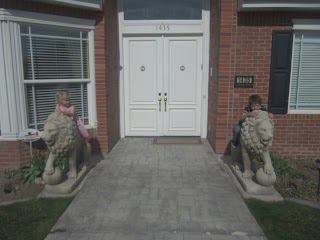 And lastly, during cleanup we found that Angel had mistaken some cute bunny candles (which are not edible) for the similarly sized and colored marshmallow chicks (which may still not be edible).  Yeah, she bit off the candle-bunny's head.  Yuck. 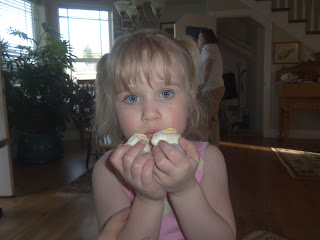