I was running errands today and saw a big, jacked-up pickup truck - we call them "virility vehicles."  It had  modified exhaust pipes just behind the cab, and as I watched, it roared away, belching clouds of black exhaust.  My first thought was to roll up the widows.  I don't want to breathe air I can't see through - air that I'd have to chew up before I could choke it down.  Blech. 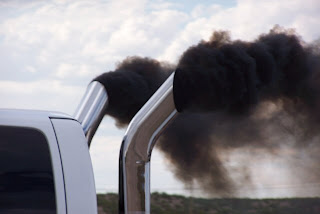 As I drove away, grateful for the breeze of fresh air coming in my once-again-opened window, I was thankful for clean air.  I have to keep the windows down because the little car doesn't have air conditioning, so I'm more aware of the air.  And I wondered.  Why couldn't that guy see how much he was polluting the air?  Did he not care?  Did he just not see all of the mess he was leaving behind?

Obviously, that black plume was neither natural nor healthy.  What if other not-good-for-you things were that obvious?  Imagine pulling up to a fast food place, going through the drive-through, and being handed a sack with black tendrils of stench wafting out.  Or a menacing cloud lingering over the candy counter.  We'd be sure to steer clear.

How about other unhealthy things?  I remember a Mrs. Piggle-Wiggle (love those books!) story about children who told lies, or said bad things.  She gave them a medicine that made oily black bubbles come out of their mouths and hang grotesquely over their heads.  What if an asphalty fog escaped our mouths when we told a "white" lie?  Or a dirty billow during an argument?  Or just a little black cloud over your head when you allowed a foul mood to control your attitude?  We would all learn to avoid those bad things.  Wouldn't life be nicer?

Pulling onto our street, I realized that I do have the ability to recognize when things are bad for me.  My soul can feel that negative smog when I enter into a questionable situation, or when I am tempted to say less-than-cheerful words.   I need to turn up the volume there, and pay more attention to how I am feeling.  Tune in to those little prompting inspirations..  I think not listening to my internal pollution warning system is bad for me.
at May 03, 2012

Email ThisBlogThis!Share to TwitterShare to FacebookShare to Pinterest
Labels: faith