Twenty-one years ago, on Valentine's Day, I woke up to a single red carnation taped to my front door.  The card was addressed to the "Smiler" and signed by "an admirer."  I lived at home at the time, and I assumed the flower came from one of my younger brother's numerous female followers.  Totally unsuspecting, I left for my college classes dressed in black and spent the day passing out anti-Valentine's Day stickers and black armbands.  True story.

After talking with some friends (who happened to be male) who were surprised at my Grinch-like attitude, I had to explain my motives.  I wasn't against love, of course.  I was all for relationships and even lovey-dovey mushy stuff.  I just didn't want to support the commercialization of a holiday intended to force people to show niceties.  They should do it by themselves.

After my speech, one of the friends sheepishly admitted to having taped the carnation to my front door in the middle of the night.  I went home and put the flower in my room.  Mine.  And then I married the guy.

Every Valentine's Day, Jay and I would race to see who could get the carnation first.  It was a fun tradition that I still continue.  I place a flower on his grave, and I smile.

This year a few days before Valentine's Day, I was having an especially down time.  I finally let up on the people around me, acknowledging that no one is responsible for my happiness but me.  I can't expect them to read my mind and know exactly what I need.  Only the Lord can do that, and I need to rely on him more. I asked forgiveness from my long-suffering husband, and petitioned the heavens for help. 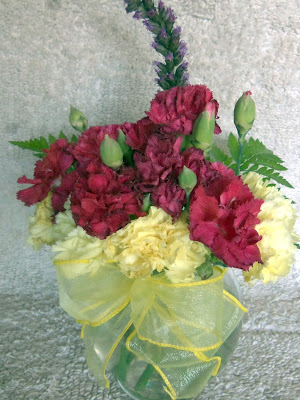 Shortly after this epiphany and my prayer, a neighbor came over with these flowers.  I had red carnations for Valentine's Day.  Thanks, Lord.  And forgive me for being so self-centered.
at February 16, 2013