I was thinking about this statement today, and I remembered a story I neglected to tell. 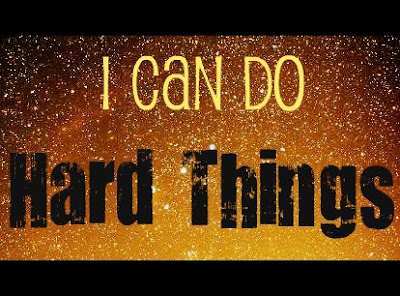 Chris had a project to do in his gifted eighth-grade English class this year.  I mention that it was a gifted class for two reasons: (1) it's a Mom brag thing, and (2) they can do more odd assignments than regular classes.  Anyway, his project was to accomplish something substantial.  Big and open-ended.  The teacher knew what the kids were capable of, and the kids knew the teacher's expectations.

Chris decided to create a video game.  I will admit, I was skeptical.  I really didn't think he could do it, and I worried that he would be setting himself up for frustration.  I wondered if he would spend more time playing on the computer than on doing his assignment (he did get distracted, but not as much as I feared).

Anyway, he did it.  He found something that he was interested in, researched it, delved in, and accomplished it.  Chris wrote, designed, and produced a video game, complete with plot, characters, landscape, and animation.  He did a hard thing, and I'm proud of him.  And although it's hard to eat crow, I'll say it.  You were right, buddy.  Good for you!
at June 04, 2012

Email ThisBlogThis!Share to TwitterShare to FacebookShare to Pinterest
Labels: Chris