I was accused the other day of treating my children like children and not realizing that a fully-fledged adult doesn't need to be bound by the same restrictions as a child.  Yes, it was one of my children who made the accusation.  Once I got over the sting, I wanted to delve into some research.  That's how I roll.

First of all, a few definitions:
Child - a person between birth and full growth; a son or daughter (Dictionary.com)
Fully fledged - of a young bird, having acquired its adult feathers and thus able to fly (Free Dictionary)
Adult - fully grown and developed; mature and sensible (Merriam-Webster)

I am honestly excited when I think of my children (definition 2 - they will always be my children just the same as I will always be their parent) becoming adults.  I want them to grow their flight feathers and take off.  What a wonderful world we live in!  So many opportunities for growth and development!  I love watching my children grow.  And I help them manage that growth.  I've long told them that my job as their mother is to make myself obsolete.  The idea is that as they learn and grow more, I help less.  The more they do, the less I help, until one day they are off and on their own.  Huzzah!

The challenge lies in the definition of adult.  The "fully grown" part and the "mature and sensible" part don't necessarily come at the same time.  Thus, an individual who has reached 18 - one of our society's hallmarks for "adulthood" could think that now they are fully grown and sensible.  (Stifling laughter.)


Let's see. Assuming that fully grown and developed is only referring to physical growth, I know that 18 is not yet finished.  My brothers grew in more height and broader shoulders well into their early 20s.  Brain development is not finished until the mid-20s, and sometimes later.  So nope, not finished.  As far as mature and sensible, I happen to know that sensible means that you think like I do.  Arrogant of me, no?  And my teens in general do not think like I do.  That doesn't mean that they don't think well, but is merely a showing that sensible is primarily in the eyes of the beholder.  Very subjective.  So who gets to define adulthood?

I reject the growing philosophy of "emerging adulthood," where new adults have the freedom to play and explore their world for a decade or more.  We used to go straight from child to adult.  Now we have an interim period of the teen years, where irresponsibility and fun define life.  Now we want to add another interim period, before we can buckle down and become adults?  Am I showing my bias?

I like this article that talks about defining adulthood:


Numerous studies reveal that the top three criteria for becoming adult, relatively universally and across age groups, are:
• taking responsibility for yourself
• establishing beliefs and values separate from your parents
• gaining financial independence

And another article, after listing a number of characteristics of adulthood, states:


Above all, true adults do what they have to do when it is required of them, and they do what they want when they can.  They are able to distinguish between the two and manage their time and efforts accordingly.

Do what you want to do.  Be responsible.  Take care of yourself.  Pay your own way.  Believe it because you decided to.  Manage your time.  Accept your consequences.  Clean up after yourself.  Do what you say you will.

And if you need to live at home and have me help you with things, then I am in a parental role.  I'm happy to help, but it does come with strings.  Love you, honey.  Get ready to fly!

Suck Your Brains Out

It's a school holiday weekend, which means I'll be approached with requests for a "game day."  It looks like this: 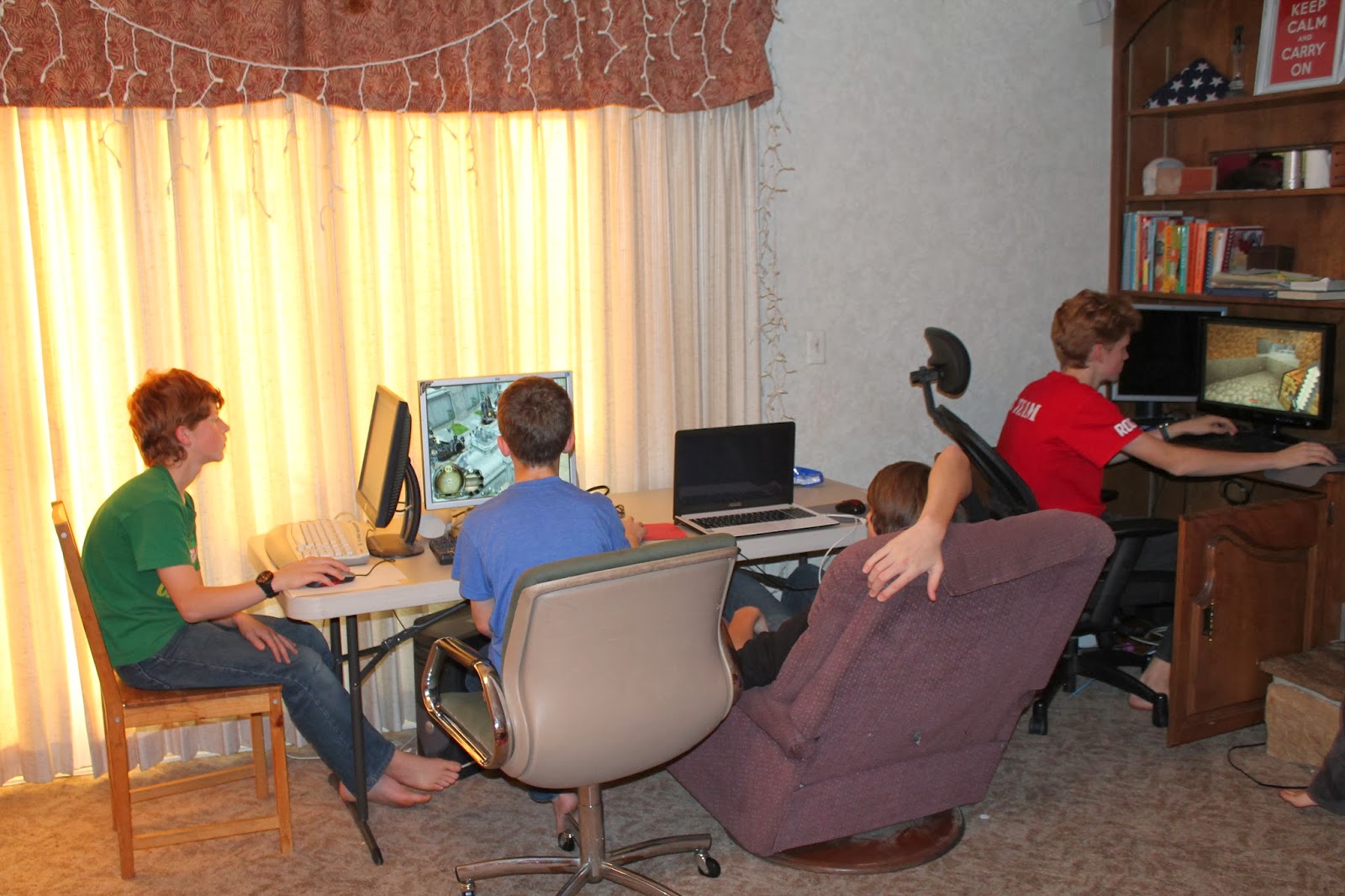 ...for hours.  Do you see all their brains being sucked out?  I don't have to feed them as much when they are in stasis mode, so maybe it's not too bad.  Maybe I'll give in if they do an extraordinary amount of work first...

Usually I do all the haircutting around here.  That means that my boys (and my man) get regular haircuts at home for free.  The drawbacks are that Mom has to clean up the hair all over the floor, they don't always get what they want, and there is usually a waiting list to get into the kitchen salon - you have to wait until Mom is not busy and not tired, else she gives wonky haircuts.

Recently, my brother and sister-in-law gave us a small collection of free haircuts - one for each of the male persuasion.  They all lined up and went.  And it was a good thing. 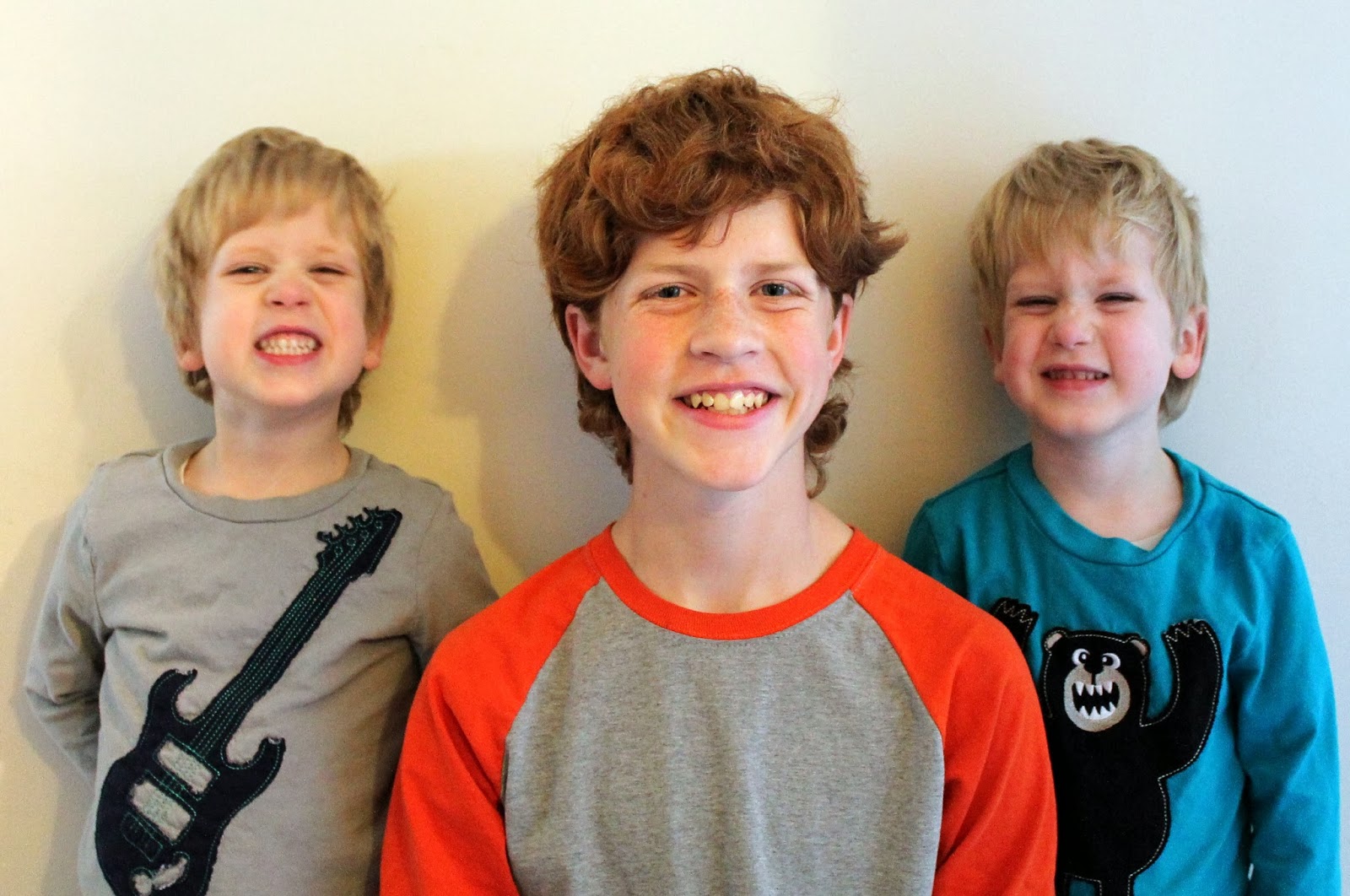 We started out in shaggy-land. 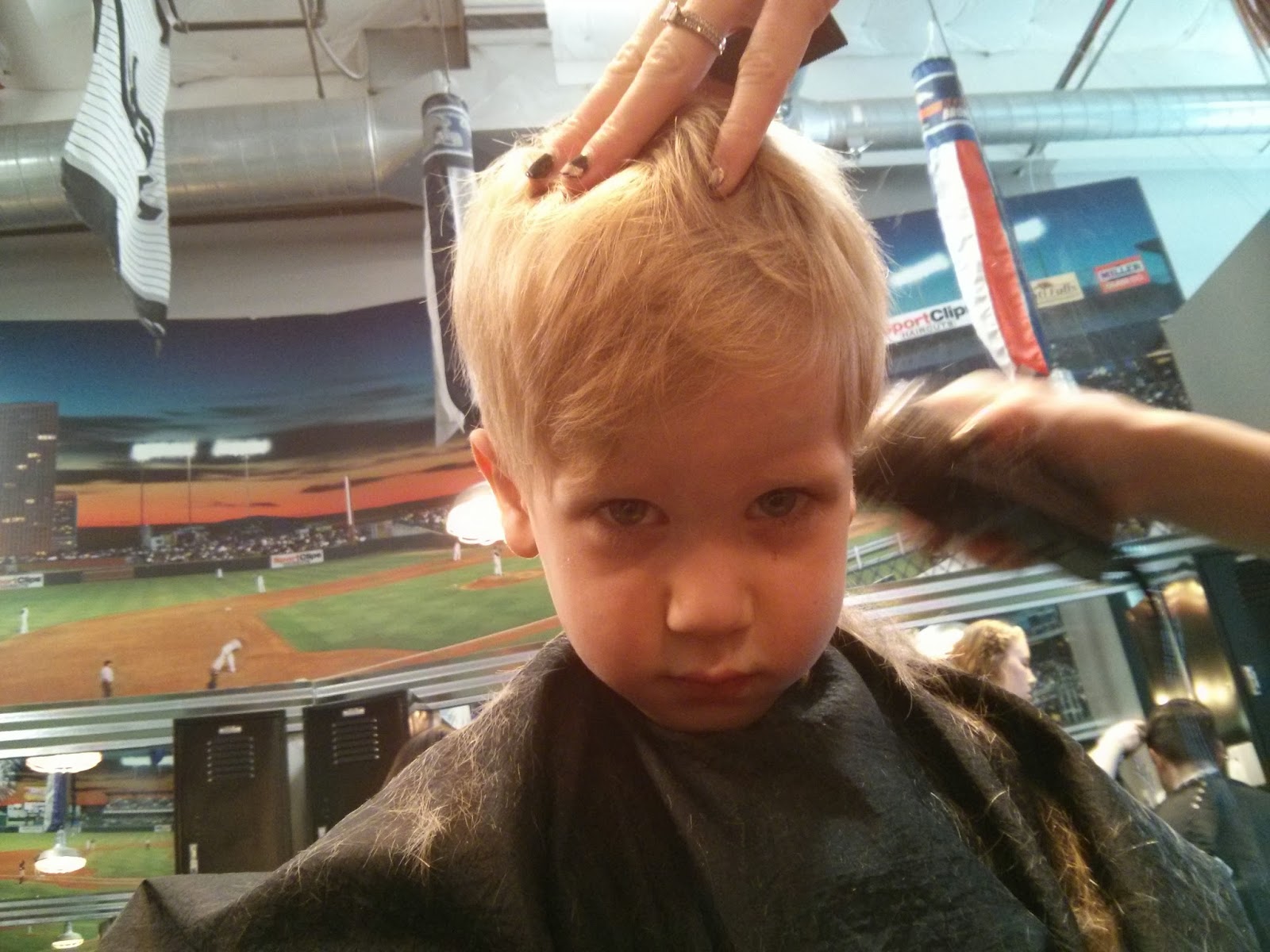 Georgie wasn't too sure about all this. 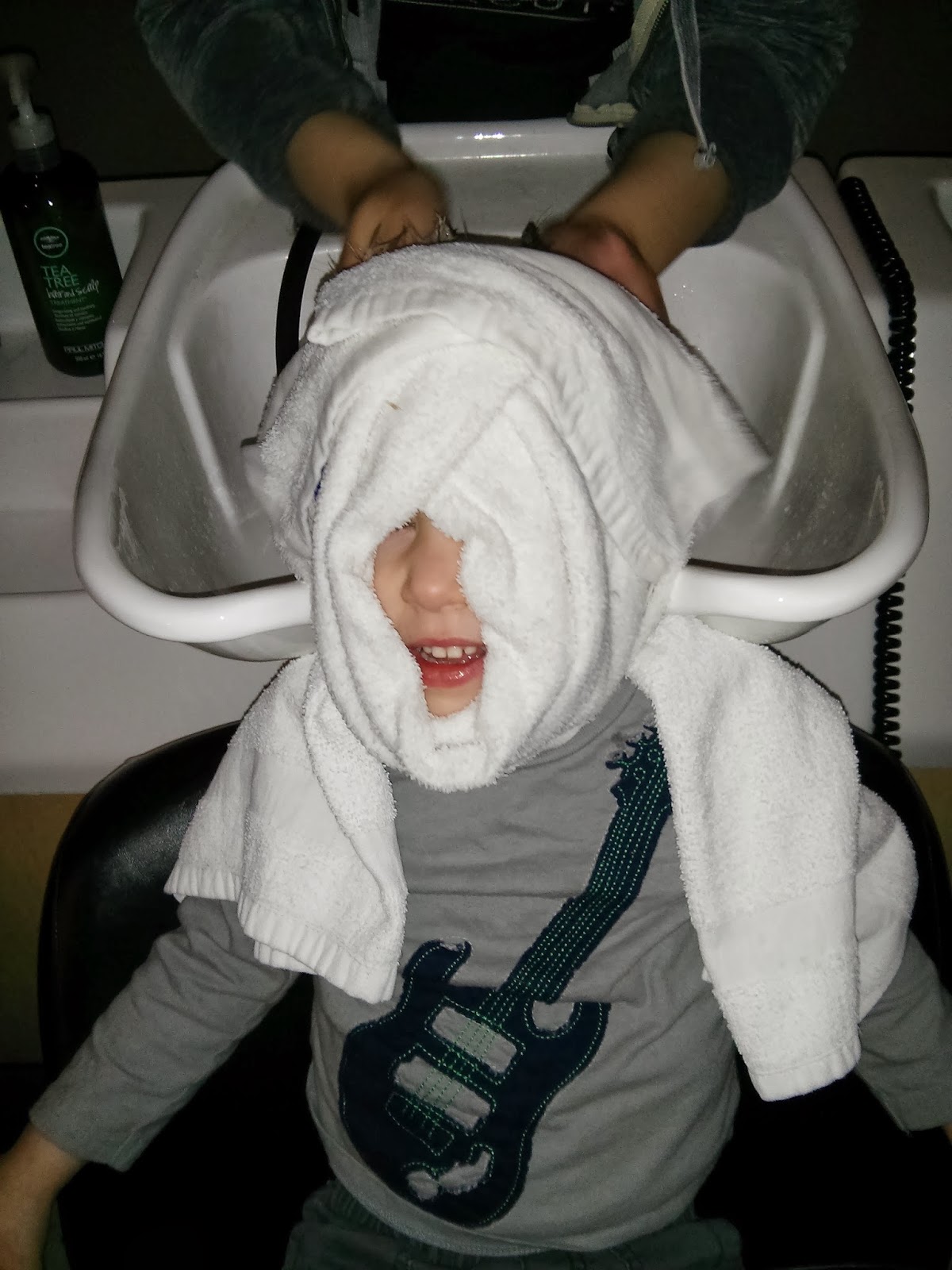 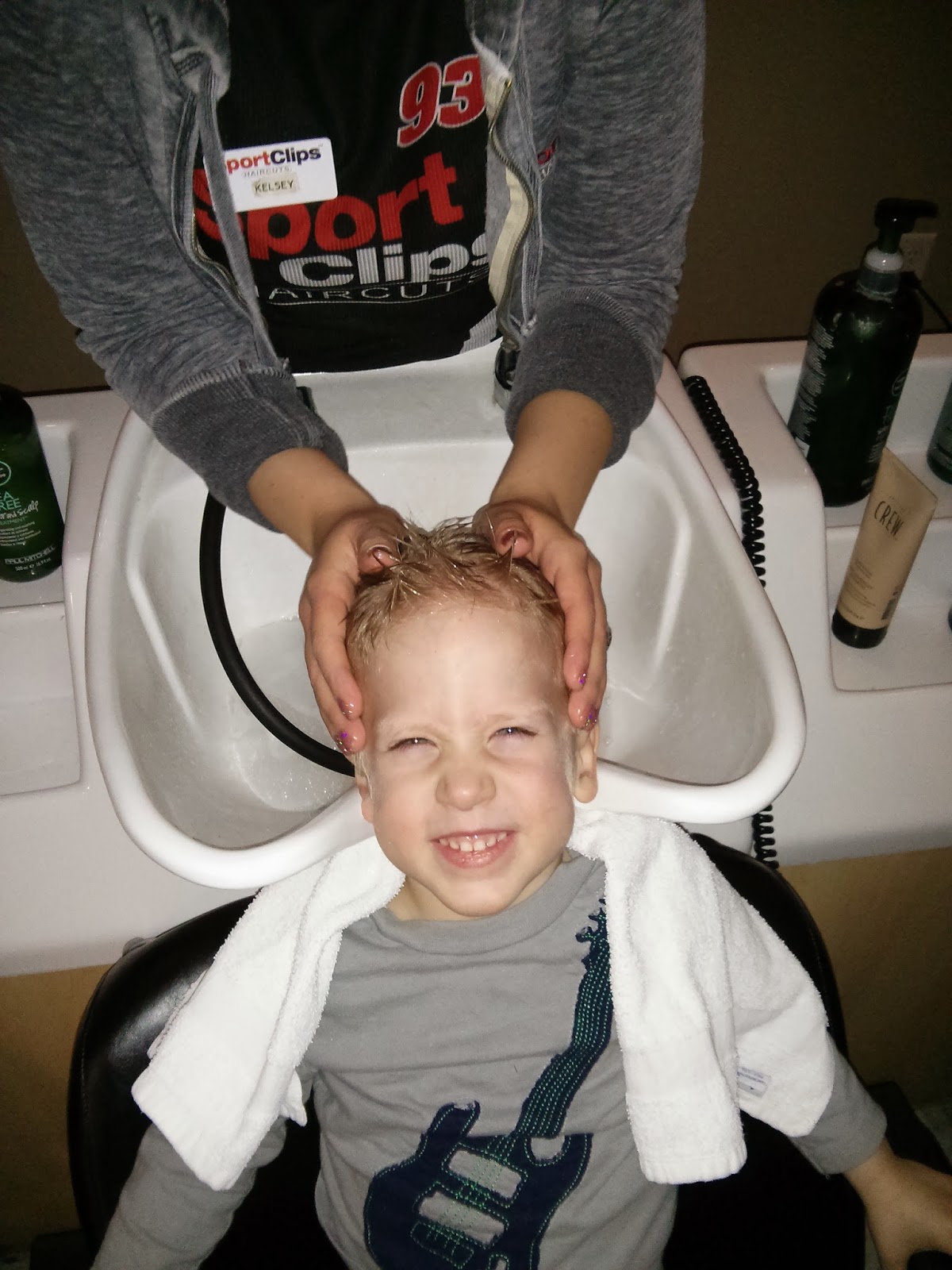 Freddie loved the wash, and the warm towel over his face! 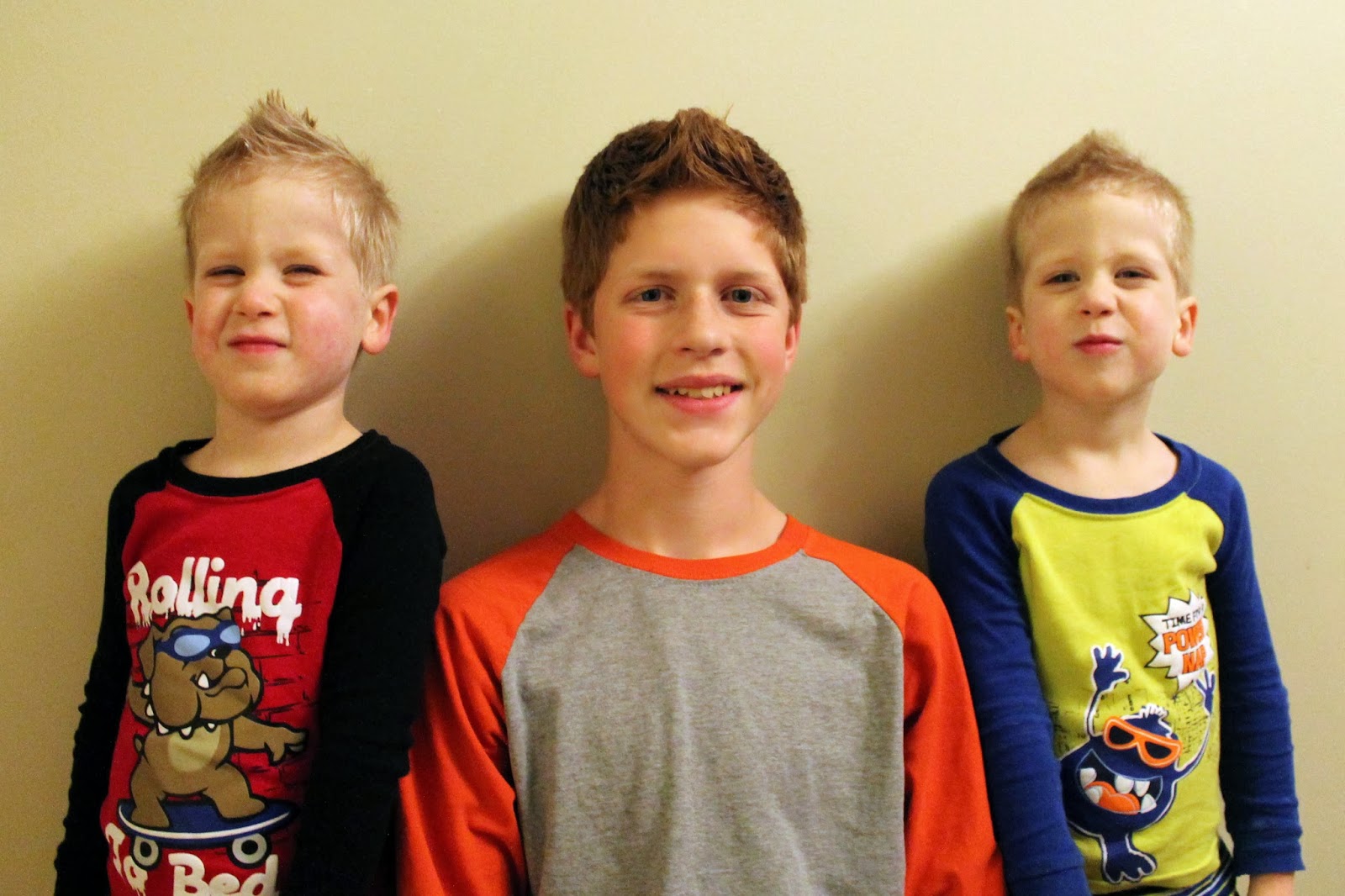 How to Avoid Extra Calories

Every day, as my boys come home from school, I am greeted by the hearty love-phrase, "What's for after-school snack?"  I am a food dispenser.  My first husband was a mechanical engineer, and as we had more and more boys, he vowed to invent a large refrigerator.  It would have a sensor where you put you hand, and it would recognize who you were and spit out the correct amount of food for that individual.  And that was when they and their appetites were little.  They grow, and eat.  They always want more and more food.  That's what I get for having healthy growing children!  That's also what I get for having nearly four teenaged boys.  Whew.  I love 'em. This is a painting!  I think I need to have it in my house.

The first dozen cookies were snatched off the pan before they were cool enough to handle.  There were a whole bunch of slightly-burned fingers with that batch.  The second batch evaporated nearly as quickly.  I snatched up the third panful as soon as they came out of the oven and hid them on top of the fridge so I had something fun to put in their lunches tomorrow.  The fourth batch only got half-eaten, until I turned my back and they disappeared.  And the fifth dozen were eaten when Georgie stole the bowl from the counter and snuck away to his bedroom where he and Freddie ate the dough raw.  It's best that way, you know.

And now there are two cookies hidden for Trent when he gets home from work, and four baggies filled with cookies for tomorrow's lunches.  The pans have been washed, and all the other evidence destroyed.  Even the crumbs have been licked up.

That is how you have cookies around without feeling obliged to eat them.  Have the children eat them.  No encouraging required.  Saved from the extra calories!

I suppose I should get back on track here.  We're counting down the weeks until Alec ships out.  On this list of things to do this week:  a National Guard weekend, and taking the official missionary picture. 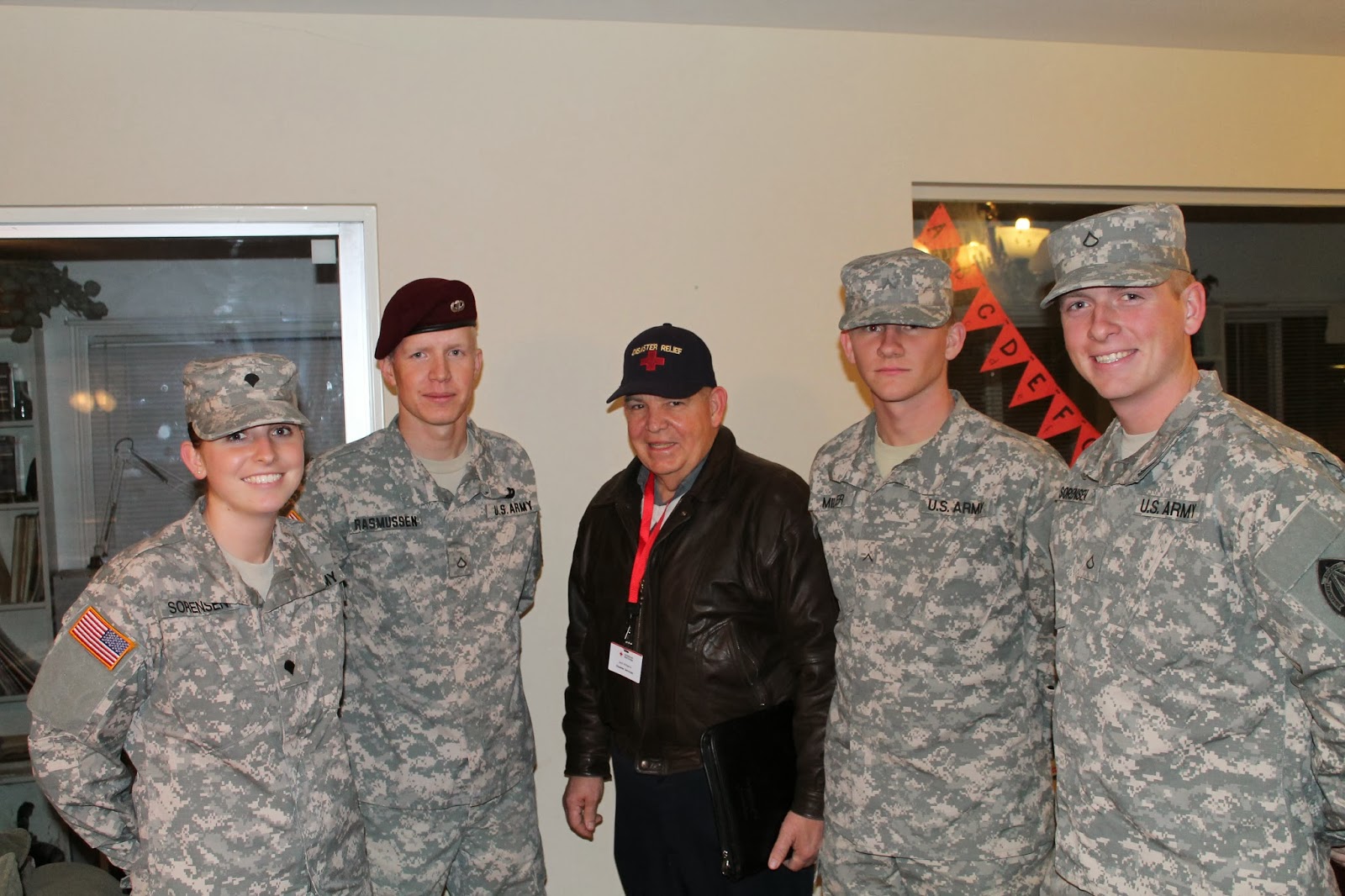 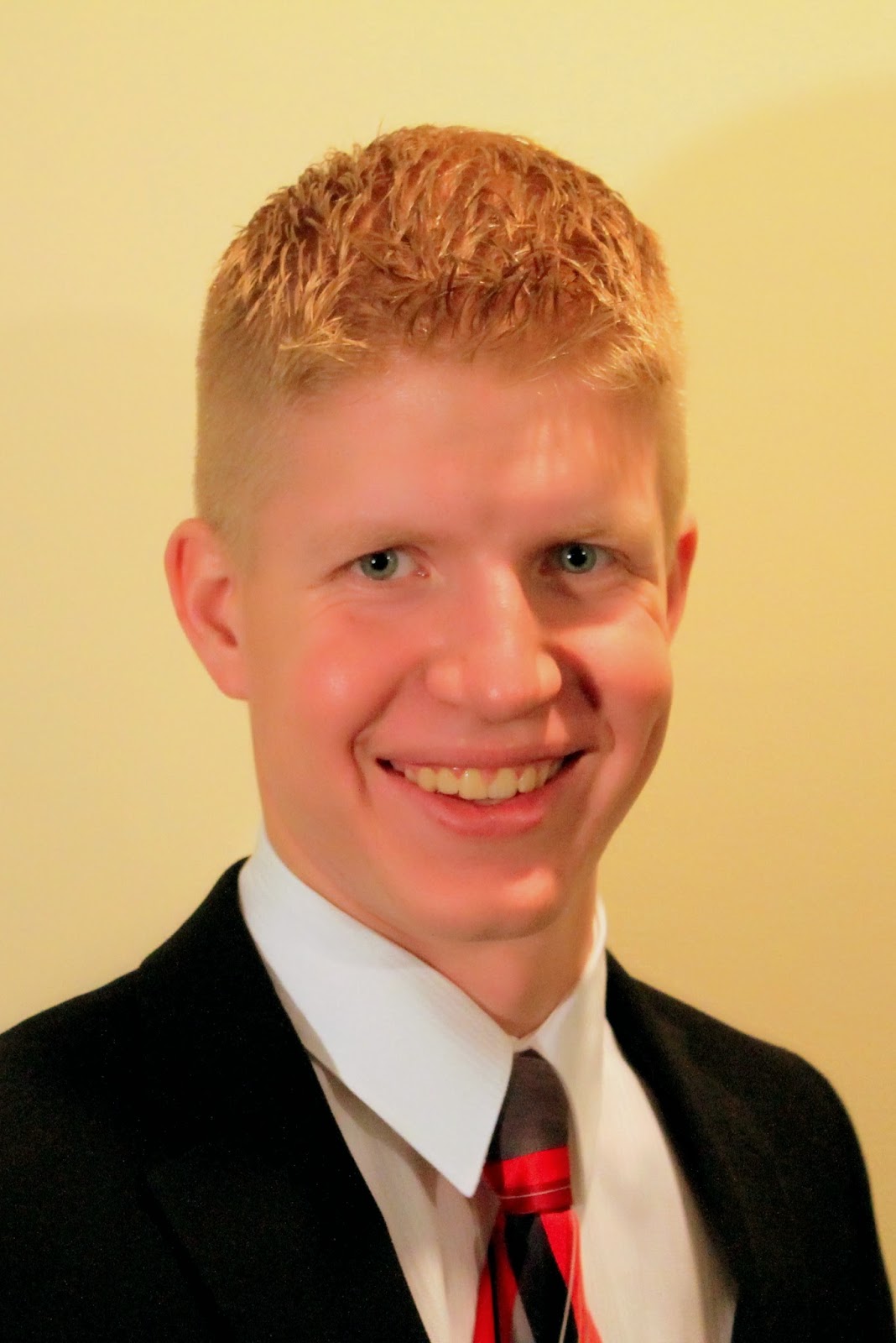 The lights are too harsh, so we'll have to take it over again.  Boy I love this kid!