Summer Melodies and the Pursuit of Harmony 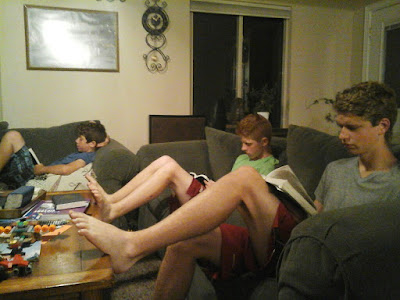 I surreptitiously snapped this shot during family scriptures the other day.  I love having my family together in one room.  I'm always impressed that they come for family time without complaining.  Most of the time.  To be real, occasionally we'll be missing someone who chose not to be with us, but most of the time it's good and they all come.

This is the first summer we've been with my dad, living in our new, cozier (realtor-speak for smaller) digs.  As a mother, I know that the tighter my kids are packed in together, the quicker they will annoy each other.  So I've been curious - and a little nervous - about how this summer would play out.  Will our home-song be lovely, or filled with jangly emotions and cacophony?   So far, most of our interactions seem to be smooth.  The kids have regular disagreements, especially the twins.  They don't know how to deal with negative situations as well, and it appears that they are a little perturbed with all the older kids invading the turf they have quietly enjoyed while the other kids were off at school.

This morning, I had to have a frank talk about the importance of respecting our family rules with one of our older boys.  He'd been slipping into a bad habit of ignoring the rules and needed some correction.  Bad behavior is harmful to the individual, to his relationship with the parents, and can be contagious to other family members.  I hate having these talks.  I was as forthright and unemotional as I could be... and it was not received well.  Not at all.  He turned on his heel and stormed off to his bedroom where he cranked up some loud music.

The few times he came through the kitchen for the rest of the morning were filled with angry looks, stubborn silence, and a roar of disharmony swirling about behind him.  Gah.  I hate this part.  Playing the firm parent, the disciplinarian, is one of my least favorite parts of parenting.  I know they need to learn and be corrected, but I wish they could somehow figure it out for themselves, instead of me needing to dole out negative consequences.    They won't learn solo.  I know that.  Phooey.

A few hours later, all three of my big boys left for youth conference.  The dark cloud left with them (after being passed on to three more people).  Harmony is restored. Sometimes I wish mothering was easier, but 'tisn't.  Still worth it.