Angel loves her dollies.  She is often found carrying one around the house, wrapped in a scarf or a blanket, wearing whatever meager doll clothing we have - or not.  In a household of lots of boys, we're big on blocks and trucks and a bit short on doll paraphernalia.

And no matter how much her brothers mock or turn up their noses, I encourage her dollies.  I want her to play and imagine and learn to nurture.  It's part of her nature.  Of course, I must insert that these strapping fine lads of mine each had a (boy) dolly when they were little.  It was a good way to prepare them for the next baby, and give them a little one to hold and cuddle while Mom was busy with the real baby.  And yes, they did play with their dollies.  Just not as much as the Angel does.

Two years ago, when Angel was in the hospital after her fall, the nurses gave her a dolly.  It's more of a stuffed cloth gingerbread man, really.  They had a basic cotton body, no face, no clothes.  The kids would get to pick a hospital gown for the dolly, so it was half clothed.  They let the children color a face on the dolly, and then practice different procedures on the dolly so it wouldn't be so frightening for the children.  Put a bandage on the dolly, have the dolly wear an anesthesia mask, give the dolly a shot; then it was easier to work with the children.  Oh, and they did the same for siblings of patients, as well.

As a result, we have four gingerbread dollies (and three hospital gowns). 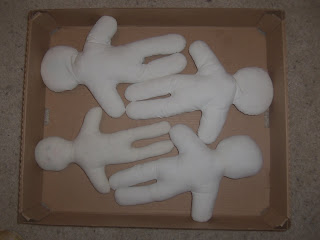 You can see the remains of a face on one of them.  The rest of the marker-drawn face came off in the wash. Seeing these naked nymphs around the house gave me an idea.  I'll fix them into real dollies for Angel's Christmas presents.

First stop: identity.  There are four dollies, so I decided to model them after Angel's four great-grandmothers.  I did some research and found out when they were all born, and what their coloring was.  I really enjoyed learning about them, and I hope that Angel will feel connected to these good ladies.

Second step: faces.  I really wanted to embroider them, but I realize that I'd spend way too much time.  And these are hospital dollies.  One day I'll make lovely, homemade dolls.  But for today, it's all about fabric paint. 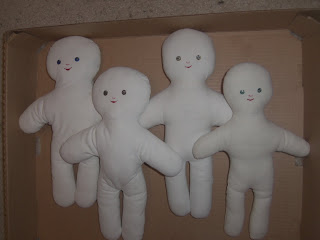 I humbly present (from left to right, in order of birthdate): Fern, Helene, Virginia, and Amy.  Blue eyes, brown eyes, brown-hazel, and green-hazel.  I could get so carried away here.  Basic.  Think basic.  I don't have much time to work on them when Angel is not around, so it's gotta be quick and easy and simple.

Next, we grow hair.