It's true that you don't know exactly how much something is worth to you until you lose it.  I was lost without my wallet.  I learned that it defines my identity.  Isn't that trite - and crazy at the same time? 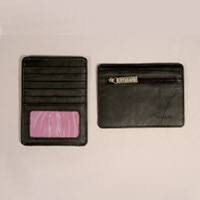 The wallet itself isn't that interesting.  It is a FlyLady special, and I like it because it is thin and (unlike most women's wallets) built to stick in your pocket.  It's longer than a regular wallet, which ultimately led to its loss  last week when it squished out of my too-shallow-to-be-anything-but-decorative-but-what-woman-wants-practical-clothes-anyway jeans pocket.  Shall I give a commentary about the general shallowness of women's clothing?  I shouldn't at this hour.

When my first husband, Jay, passed away, I took all the things out of his wallet and put them in his memory book.  I thought it was interesting to see what was important enough to him to carry around with him.  It really is a part of who you are.

For me, I had my driver's license, and my credit card.  Those were the two I was most nervous about losing.   Most precious to me is my temple recommend.  I also carry around my library card, two insurance cards, and an Old Navy gift card that might still have some credit on it so I can't yet throw it away.  In the back pocket I have a few (as in ONE dollars) bills, a spare car key, and my most recent receipts.  It's not very exciting, but those things are important to me.

And I was so grateful to have that nice couple show up at my door on Saturday afternoon with my lost wallet.  It's nice to know there are honest folks in the world.