We rang in the new year with a sore throat or two.  Needless to say, we were not terribly festive.  We managed to stay awake all evening, which was a challenge.  I don't know why we can't end the old year a few hours early!  We even missed the countdown because of a confusion over the correct channel.  Oh well.  The new year came in whether we watched it do so or not. 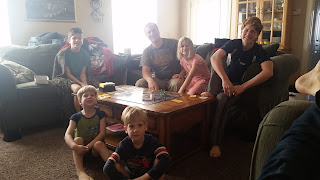 Trent got a new game, based on a show he loves, so he played that with the kids.  Of course, we had to have a round of Disney Monopoly as well.  The twins are old enough now, mostly, that they don't throw the pieces around like a Tasmanian devil explosion anymore, so that's good.

For the first time in years - a couple decades, actually - I don't feel panic at the beginning of a new year.  People look back at the past year and hope the next one will be better, but I always had an anxiety attack, worrying like crazy that the new year would actually be harder than the old one was.  Those fears of mine were not wholly unfounded, because we've had some pretty hard times.  But this year feels different.  Now, I feel different.  There's a new optimism in me that I haven't seen for a long, long time.  I really do feel that this year will bring good things.  Hooray!

Happy New Year!  I think this will be a good one for us.