We had a big Christmas party with my brothers and their families over the Christmas break.  Actually, we had three family parties: an adult one with Trent's siblings and parents that we look forward to all year, the big party with all of Trent's family, and the big but not-as-big party with my family.  Trent's parents have seven children, and there are nearly 40 grandchildren, plus a handful of great-grandchildren, so we are getting to be a pretty large group.  I only have four brothers, and no married grandchildren (Alec is the oldest of that generation), but we are getting substantial as well.  All the parties were enjoyable, but I'm only going to write about the one with my family because I was in charge of it.  And I didn't take any pictures of the others.

We met in my brother's church building because we needed the space for the activities we would be doing.  I wanted to just play lots of games.  We marked off a space for the little kids and build table-and-blanket forts for them.  My small fry were very happy all day there with paper to color on and games to play and lots of blocks to build with and a huge pile of stuffed animals.  And they ran around the halls some, too.

The first thing we did was take a group picture, before we got too wild and ragged.  I'll see if I can find that.  I think we ended up having more than 30 people there.

We went through our game closet and brought all the games we were tired of, and my mom's old games for a game swap.  We just piled all those games on a long table and the middle kids played some during the day.

We had a family tree race, and tried to be the first team to assemble our ancestors in the right order.  We learned that we know more about our pioneer forefathers and mothers than we do about our German ancestors.  We also learned which brother we should have on our team!  (hint - he's the deep-thinking one) 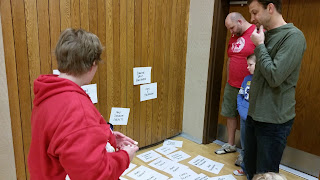 We played a game of Family Feud, where we learned that slamming your hand down hard on a bell really, really hurts, but it's worth it (maybe?) if you get the question for your team.  Also, trying to kiss your wife as a means of distraction so she doesn't hit the bell before you may not work as well as you want it to.

Trent arranged for a pizza truck to bring us our dinner, which was delicious and fun.  I'll never know how someone figured out to put raspberries on pizza, or mangos, or peanut Thai sauce, but they made some really amazing combinations.  And the dessert pizza!  Yum.  What a man I have.

After dinner, we cleared out all the tables and chairs and got ready for the big snowball fight.  We all brought our Christmas boxes and leftover wrapping paper and piled it up in the middle of the gym floor.  We split the boxes, the paper, and the people into two more-or-less equal teams, handed each team two rolls of packing tape, and blew the start whistle.

The rules were simple.  The forts had to be behind the free-throw line.  If you got hit with a "snow" ball, you had to lay down before you could run away. 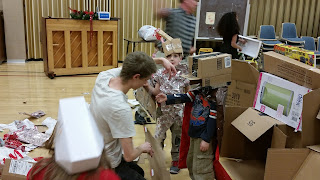 I loved watching Chris's vision and creativity with building the fort and outfitting his little brothers.  He was so patient!

The forts were pretty impressive, and surprisingly sturdy.  All the kids (especially the big ones) had a good time building.  It doesn't hurt to have men with lots of building experience, die-hard Lego creators and even a general contractor in the mix. 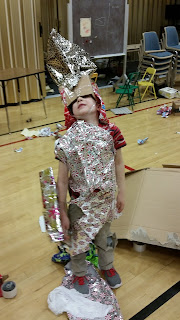 Freddie in his peppermint armor.  He refused to take his helmet off, even though it significantly impeded his sight.

I didn't bother further explaining or enlarging upon the rules, so they developed naturally.  Scrunched wrapping paper doesn't fly very well, and was helped out with a bit of tape.  "Getting hit" was defined as "on your skin or clothing," so elaborate armor was invented. 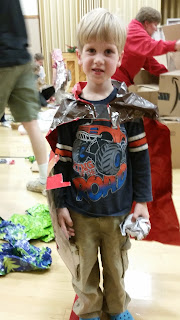 Georgie ran laps around the gym so his wrapping paper cape would fly out behind him.  He also had a box-helmet with a tall red flag on it, but it was too easy for the enemy to spot and thus was abandoned. 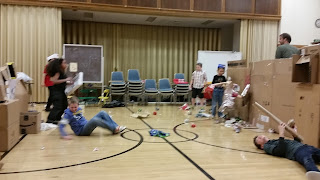 I think they spent more time in building forts, making ammo, and crafting costumes than actually lobbing hits against the other team.  It was fun to watch the creativity and comraderie.  After a while, but before they could possibly be ready! I blew my anemic whistle for the snowball fighting to commence.  And then I moved out of the way.

We had some couches set up on the sidelines for Opa and mothers with small babies and anyone else who would rather watch.  I retreated to safety there, although we were not immune to the occasional badly-lobbed ball or retreating warrior running recklessly back to his fort. 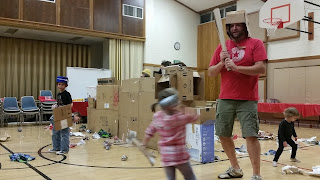 We even had Goliath, taunting the other team to send out their best warriors to best him.  The little girl in front of him came our and did just that.

The snowball fight ended as the forts were falling apart, and when one team's fort was propelled over the center line.  It was a wonderful, fun mess!  We played all day, and had a great time.  At least I did.  I love being with these good people!  See what happens when you have a good family?  Families are pretty awesome, and I'm grateful for mine.