Today I did a load of laundry for the third time.  It was a bunch of towels that I kept forgetting about and left in the washer.  Ew.  But now they are nice and fluffy and stink-free, thanks to a bit of bleach and a good dash of vinegar.  And I folded three loads of laundry that has been sitting by the piano, where everyone who comes into our home can see it.  I'm much better at washing than folding.

I learned that I should not try to sniff hot oil in a deep fat fryer when I am lifting off the lid.  I burnt the inside of my nose.  It still feels yucky.

I also learned that the Angel has an inside scoop on Heaven.  She told us that Grandma Susie would give us an orange telephone and then we could call her and Heavenly Father.  I'm looking forward to seeing how this works.

I invented a new dinner with some freezer-burnt steak (cooked to perfection in the crockpot), some leftover baked potatoes (cut into chunks and pan-fried) and white gravy.  I called it steak and potato hash and we had it with a green salad and fresh  30-minute baguettes.  It was a hit!

I had to spot-clean the twins' carpet after their naps - again.  But pinning their zippers up on the footie pajamas was successful in keeping their diapers on.

I cleaned up the kitchen two or three times, picked up the living room more than that, and decided not to clean my own room.  I'll do that tomorrow.  Maybe.

I read some in the book I borrowed from a nice neighbor, Mere Christianity by C.S. Lewis.  I thought I'd like it, but I am pleasantly surprised at how readable it is.  I'm loving the book!

I rescued Chris' saxophone cork grease from Freddie, who thought it was a tube of chapstick.  Freddie eats chapstick.

I drove Dave and Ed to school and back.  I really need to see if there isn't a carpool I can join so I won't have to drive so much. 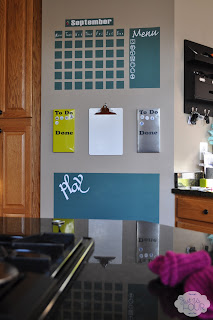 I saw this chalkboard wall and I'm seriously considering doing something like this, only with the calendar squares ever so much bigger.  We have a lot of schedule to coordinate around here.  I have a wall that I use for  our "command central," but it has textured wallpaper on it.  I'd have to strip that off - would it be worth it?  I have a bit of a hangup abut not having a paper calendar to save.  Anyone else hoard old calendars?

I got a phone call from Alec, who said he'd be coing home this weekend, and could we buy him a new backpack?  His old one (and his helmet) got demolished in the bike wreck he just had.  Fortunately, Alec only got a few bumps and bruises.  Glad his guardian angels were watching out for him!

I smiled as I listened to David and Eddie play night games with a bunch of neighborhood kids.  Our yard is big enough to be a great dark-playground.

And I stayed up until midnight talking with Ben, who casually used the word "burpy" in conversation.  I really like that boy!
at September 22, 2012

Email ThisBlogThis!Share to TwitterShare to FacebookShare to Pinterest
Labels: today