Run, Run, As Fast As You Can

This boy is on the track team this year.  And last year, although I didn't post any pictures of that.  In fact, our family has contributed to the track team for several years now: Ben participated all through junior high and high school, as has Chris.  They are all fast runners. 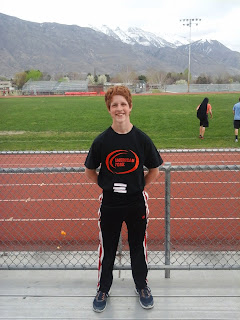 They get their speed and strength from their father, who likewise loved to run.  He never was on a running team, but he enjoyed it.  In fact, when he felt a cold coming on, he would buy a case of oranges, eat as many as he could handle (which was a lot), and run until he couldn't run any more.  He was convinced that the combination of the two explained why he never fell very ill, and his mild symptoms didn't last more than a day or two.

Me, I wear the shirt that says, "If I'm running, you should be too because something is chasing me."  I don't enjoy running.  At all.  If you do, kudos to you.  I'll sit and watch you and cheer. 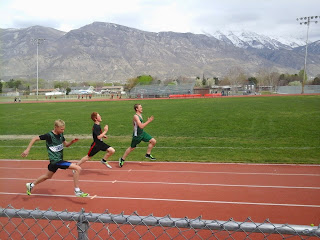 Ben and Chris are mid-distance runners and excel in the hurdles.  David, on the other hand, is a sprinter.  At the last track meet. he took second in the 100 meter dash.  I remember being impressed with his speed even when he was a little bitty boy.  I could never keep up with him when he decided to dash away.  He has an impressive strength, ans I'm glad he has this outlet. 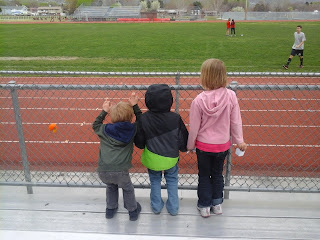 And impressively enough, these little ones actually enjoyed the tack meet this time.  It was fun to watch and cheer together.
at March 25, 2015