We've had a bundle of birthdays in the past while. Since I have not yet died due to cake overdose (but  been close, a few days), I will share them here.

David just turned 14. Fourteen!  He usually requests corned beef because it is so plentiful this time of year, but this time he switched it up. His request for birthday dinner was alfredo pasta... with Spam. Spam, spam, spam, spam, spammity spam!  He got his wish, and I didn't even have to go grocery shopping, thanks to one lonely tin of the gelatinous goop I found hiding in the pantry. The enormous bowl of pasta turned out pretty well, if I do say so myself.  They ate it up... literally. The secret ingredient is a dash of nutmeg, if you must know. It's not quite alfredo sauce without it.

I made a party cake with an old cake mix I found in my mom's food storage. It looked like a fun one - white cake with colorful sprinkles. Just for fun, I baked it in a big metal bowl instead of a flat pan. But when I tried to tip the cooked cake out of the bowl, the whole thing crumbled into bits. I think I need to toss the rest of those old cake mixes!

I didn't have a car to run to the store to get a new cake (Chris took it to work, and the Mr. was working late), nor did I have time to bake a new one. So we punted. I made a quick batch of frosting and we poured it over the mashed up cake bits. I melted some white chocolate and we made cake pops!  Sort of.  We stuck the candles in the big bowl of sticky stuff because he isn't yet too old for blowing out candles. Then each child got to reach in, squish together a few balls of cake-and-frosting and dip it into the melted chocolate. And after the first one fell to pieces during the dipping, we drizzled them instead. Rather unconventional,  but the kids thought I had come up with a fun new dessert!  Er, yes. Yes, indeed. That's just what I meant to do. 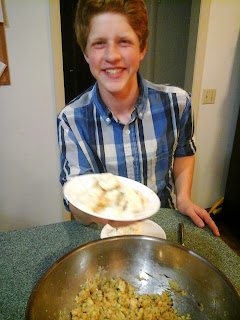 Things I love about my #4 boy:

1. He is thoughful. The other day I was pretty frazzled and he sweetly came over, gave me a big hug, and told me it would be ok.

2. This boy tells the truth.

3. I love the big grin that splits his face in two. Reminds me of his happy daddy.

4. He has an intense drive to do things. Something!  Anything!  He's a do-er.

5. He is a fast runner. Always has been. I'm looking forward to see how he does on the track team this year.

6. He is not afraid of people, and will just walk up to strangers and talk to them.

7. He is a great salesman. I don't know how many times he sold things - strollers, baked goods, garden produce - on the street in front of the house.

8. He has a good business sense to know what people want and help them get it.

9. He is honest about his faults - and his strengths - and doesn't try to hide them.

11.  He watches his time and knows exactly how long he needs to get ready to go (and doesn't get up one moment earlier!).

12. He is actively working on making himself better. When he know he has a weakness, he comes and tells me about it, and works on it diligently.

13. He loves being with people.

14. He is developing a great singing voice. I am amazed to hear this little boy of mine (who isn't so little any more!) hit some pretty impressive bass notes.