I was calmly making dinner and went downstairs to the storage room to get a can of cream of chicken soup.  OK, with our family, it was getting four cans.  Suddenly, I heard panicky yelling coming from Chris's room.  It sounded something like a muffled, "Oh no!  I have a band concert right now!"  I wasn't sure, so I moved closer to his room and peeked through the doorway.  I saw a fifteen-year-old boy, hopping up and down on one leg while frantically stuffing the other leg into a tuxedo pants while yelling, "Mom!  We've got to go!"

Hate it when we forget about these things.  I put dinner on hold, raced him (fulled dressed by this point) to the junior high school (made it with just a couple of minutes before curtain), zipped back and finished throwing a broccoli chicken casserole together.  I barked out instructions to David and Eddie, located Angel and the twins, and rushed back to the school. 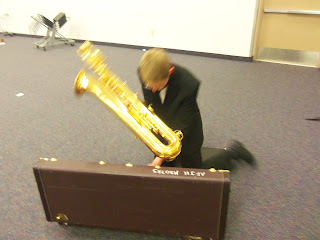 I only missed the intermediate jazz band and the first number of the advanced jazz band.  Chris later told me that he had a solo in that first song.  Drat!  It turned into a double drat when he confessed that it was an unintentional solo - he was playing during a silent space.  He's a good sport.

I enjoyed the symphonic band playing selections from Lord of the Rings and Narnia.  I have some real favorites in those collections.  But just as the tempo picked up and the dynamic swelled, a clarinet would squeak.  Or the drummer started to lag.  Or the French horn missed his high note.  And I'm distracted.

So instead of focusing on the beauty of the music, and letting it fill my heart and soothe my soul, I end up picking out the mistakes and dwelling on the sour notes.  I realize that these are junior high kids.  They make mistakes.

It didn't really sink in until Chris's wind ensemble started playing a medley of some of my favorite Aaron Copeland pieces, that I was also making mistakes.  I smiled and shook my head at myself, then concentrated on being swept away by music.  I was alone, without any children to tend to, sitting in a new auditorium with great acoustics, listening to live music.  Don't concentrate on the errors.  After that, I was content.

I sigh and let the harmonies dulcify my jangled nerves.  The rhythms smooth my worry-wrinkled face.  It's Botox and Valium, but better.

To catch the beauty of the world around me, I need to not be so taken by the jarring distractions.  Lesson learned.
at May 16, 2013