A Bad Day For the Chicks

Georgie and Freddie love to climb in the pen with the chicks.  We have them in their new (yet unfinished) coop, with a fenced-in walkway leading to the fenced-in trampoline pen.  It is all but impossible to keep the children (nearly all of them!) away from the chickens.  Angel picks them up and carries them around and holds them and cuddles them until we think they might lay scrambled eggs, but they seem to like it.  But the twins are not gentle.  They love to chase and scare and throw things.  The chicks run from them.

And if that wasn't enough, Trent climbed on the roof and started banging like crazy.  I don't think the girls understand what tar paper and shingles are, except that it's awfully noisy. 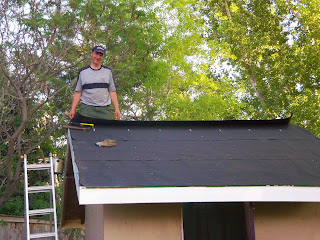 And later in the afternoon, there were amazing and terrifying sounds of chainsaws and breaking wood and crashing branches.  Two old, dying trees leaned near the coop, ready at a moment's notice to topple into the neighbor's shed.  Today was the day they gave up and were reduced to piles of leaves and firewood. 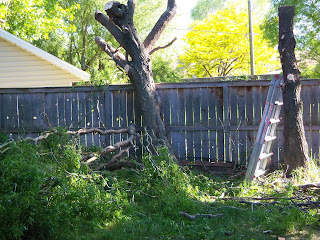 When I checked on the chicks, they were huddled together in a corner of the coop, making distressed peeping noises.  I think tomorrow should be quieter.