Silent Night.  One of my favorite hymns, and one of the most popular.  It's the only one I can sing in three languages: English, ASL, and the original German.  I love the story of the song's genesis.  You can watch the whole story, filmed in Austria! - here, or get just a taste by watching this trailer:


I love the story of the WWI Christmas truce of 1914.  I know that such truces were not entirely uncommon in those days of trench warfare, but I can believe that the general goodwill of Christmastime, combined with the singing of Silent Night could invoke cherished feelings of peace.  Beautiful music can work miracles.

My favorite version of Silent Night is an instrumental one that begins with wind chimes and men's voices along the melody line in a mellow "ooh."   We played it in wind ensemble in high school, and I awoke to the magic of this beloved carol.  It makes my heart feel three sizes bigger every time I hear it, and then sad because I don't know the name of the arranger.  One day I'll find it again.

You can get this subway art here. 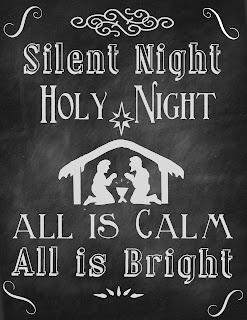 Thanks to SecondChanceToDream for this printable.


And tonight, "schlaf in himmlischer Ruh."

Email ThisBlogThis!Share to TwitterShare to FacebookShare to Pinterest
Labels: holiday