After graduation, Alec had to return to his barracks with his group,and I picked him up later so we could spend the day with him.  When he slid into the front seat of our (much nicer than I thought it would be) rental car, there was a pile of papers on the seat.  As he reached to grab them, he realized that the big white envelope was for him, and his eyes flew open wide.  I got him.  Evened up the score a little.

A few weeks ago, Alec called home like he usually did. In the course of the conversation, he casually mentioned that when I flew out, I might want to take a later flight that day, as his mission call might be coming in the mail.  Ok.  Wait.  Your what??

Alec had prepared the paperwork necessary to send in his mission application before he joined the army.  We were working in it back here.  He told me that he would wait until he got home to send it in.  But then he sent it in earlier, and didn't.  tell.  his.  mother.  I'm sure his dad was laughing his head off in Heaven.  Jay loved to pull surprises on people, and Alec has a healthy dose of that in him, too.

So when I got the big white envelope in the mail from church headquarters...  as I was pulling out the driveway to head to the airport, of course...  I didn't tell Alec that I had it.  We had hoped, but not expected it to come that day.  It was a good surprise.  Touché, my dear boy. 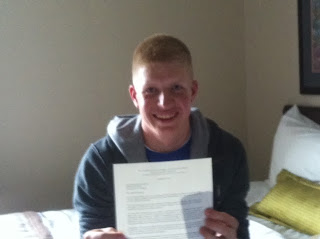 We hurried back to the hotel where Alec carefully opened the letter.  Tears ran down his face (manly ones, I assure you) as he read, "You are called to serve in the Cape Town, South Africa mission."  I'm still teary, and excited, and gonna-miss-you-honey as I type. He'll report to the missionary training center there in South Africa in the spring.  He made some happy phone calls and posted his news on Facebook.

Coming kind-of-soon, to an area not-so-near you (actually more far, far away than anything): my Alec.  And he'll be awesome.
at November 13, 2013