Have I mentioned enough times that we had a rough time with our travel from home to Virginia? We got waylaid in Chicago long enough that we were going to miss our last connecting flight. Hooray for some hard working airlines people who got us a more direct flight instead. Even still, we got to that last airport after the car rental counters had closed. We had to take what cars were left... and we didn't get a good deal. And then we had to drive for what turned out to be two hours to get to our hotel... at 2 am. Or was it 3? Regardless of our exhaustion, Alec's graduation was bright and early at 8am, local time. That's 6 am for the time our bodies were used to.

Dad and I managed to drag ourselves out of bed and find the right building on the army base. Challenging after having been given wrong instructions twice. Dad slowly climbed the flight of stairs to get to the auditorium. We slipped into our seats as the graduates began to line up to get their certificates. Close. I knew we were fine because they go in alphabetical order, and we're not at the beginning. 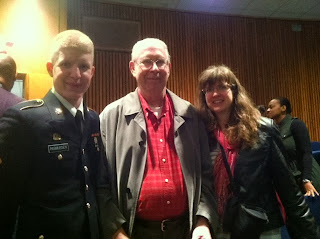 To my surprise, they called Alec's name first!  And there he was, in the front of the line.  He earned the highest marks of anyone in his entire class, and graduated with top honors as Distinguished Honor Graduate.  Of course, my iPhone refused to turn on when I was that insistent in it turning on NOW.   So I didn't get any pictures of him walking across the stage or shaking hands with the Army brass who were at his graduation.  But I saw it.  At least I made it there.  Whew.  I'm a good mom after all.  Barely.