I just read an article here about editing the stuff in your home.  If one thing is good and beautiful, ten are not necessarily better.  Too often, they are clutter.  It was refreshing to read that and not buy into the stuff-your-home-from-wall-to-wall-and-knick-knacks-arranged-on-every-surface mentality.

I am a minimalist.  You wouldn't think so, with my big family.  But I need to be even more, or I would go crazy with all of everyone's stuff.  Things do creep in, and manage to cover every available surface.  After a while, we suddenly notice the creep and go on an editing binge.  "Editing" is such a nice word.  Much better than "purging," no? 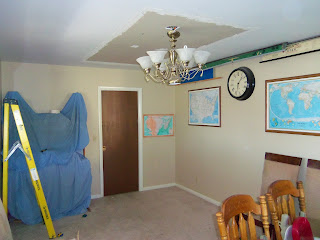 Alec has been fixing Trent's ceiling escape hatch.  It looks so much more... closed now.  He's been doing a good job, and learning about mudding and taping as he goes.  Home repairing is one of those things I want my kids to know before they fly the coop.

We moved the computers out of the dining room as part of this project and finally took out the tables they were resting on.  We pushed the table into the living room so we wouldn't get mud plops on it.  I think I'll even relocate the desk and hutch that is hiding under the blue sheets.

I'm loving the open space.  Part of me feels like I need to move some more furniture back in, but I'm resisting.  Now I can breathe while I eat dinner - after we move the table back in, that is.
at May 03, 2013