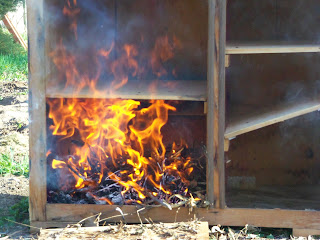 So we set fire to an old wooden cabinet that we found when we cleaned out our lower patio.  It was in the house when we moved in, but we didn't have a use for it and set it out on the patio to take to the thrift store later.  Did you ever notice that "later" almost never happens?

And so it sat, the old, falling apart cabinet, and got weathered on all winter.  It really looked bad when we found it again.  We decided to burn it up. 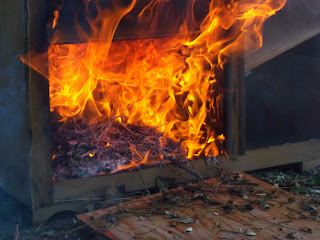 Setting things on fire is fun and memorable and together as a family, isn't it?  The scouts set a nice little fire in one compartment, and we watched the fire slowly start to take over the whole cabinet.  One the whole thing was ablaze, it was quite a show. 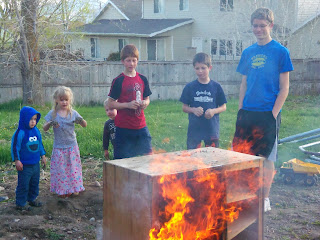 The inside shelves collapsed with a startling noise.  Chris propped the doors in front so the flames wouldn't shoot out quite so far.  The neighbor kids started to peer over the fence to watch.   When the flames were leaping, I realized that David and Eddie had not gotten rid of all the nearby vegetation like I had asked them to.  A small pile of dry grass clippings started to smolder, and I hollered at Chris to get the hose. 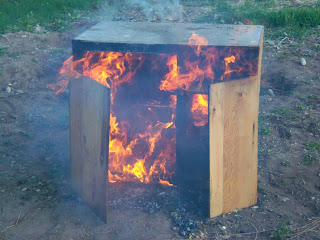 He found the hose where it had been stashed last fall, but it wasn't long enough.  He grabbed David and they sprinted around the house to get the longer hose.  While they were hooking it up, the wind shifted and the long flames that had been fanning out over a bare patch of ground started to get excitingly close to our wooden fence.

Finally, water.  Chris doused the grass embers, but then we heard... sirens.  Fire trucks.  They got closer and we got nervous.  I remembered that I am supposed to be a responsible adult.  Sigh.  So put the thing out, boys.  They were disappointed, but a little bit relieved that it wasn't going to get any scarier.  I think it was more adventure than they were anticipating.

The water, of course, made a huge plume of steam - enough to be seen for several neighborhoods.  But we got it out.  No, we're not done burning it up, but we'll take the pieces and finish them off in our responsible fire pit.

Just as soon as they dry out.  And we'll remember to be smart next time - and not to forget the marshmallows.