Well, I guess it's not really a used bread store.  I just call it that.  It's really the bread reject store.  Some people call it the day-old bread store, although we all know that the bread there is a bit more than just a day old.  Even my bread, homemade without preservatives, lasts more than one day.  I digress.

We have a store in town - most towns have one - which sells bread that is too old to sell at the regular store.  Every day, the bread trucks take the new bread from the bakery to the grocery store, scoop up the too-old bread still on the shelves, and take it to the used bread store.  There, you can buy bread for really cheap.  And usually packaged muffins and snack cakes and chips and the like.  After a while, it's too old to even sell at the too-old store, and they throw it out.  Or they give it to farmers for free as animal feed.

Last fall, Trent heard about this deplorable waste of good food, and went down to the old bread store to see if he really could get a few loaves of too-old bread to feed our chickens.  He got a little bit carried away, and came home with the car packed full of too-old bread.  Packed.  Enough to kill our chickens and smother us, as well. 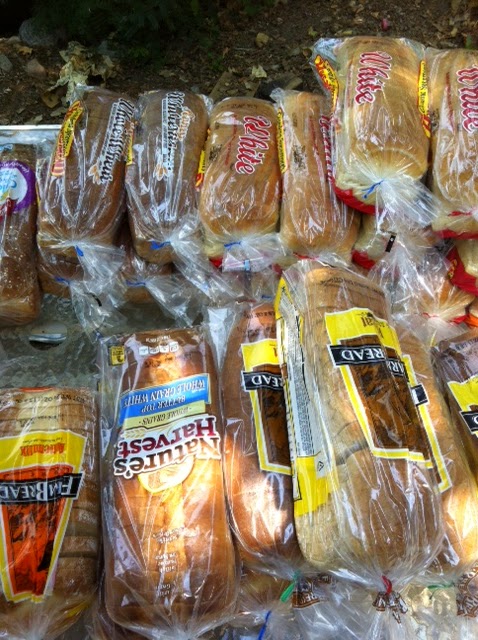 There was white bread and really white marshmallow bread and wheat bread and bread with sunflower seeds and bread with nuts and twigs and bagels and packages of stale Sara Lee snack cakes and more bread.  He unloaded all of this into a freezer, because it wouldn't last long without being frozen.  We filled up our refrigerator freezer, a big chest freezer, and half of our giant you-could-hide-a-dead-body-in-there garage freezer.  And we still had a bunch of the best bread on the counter. 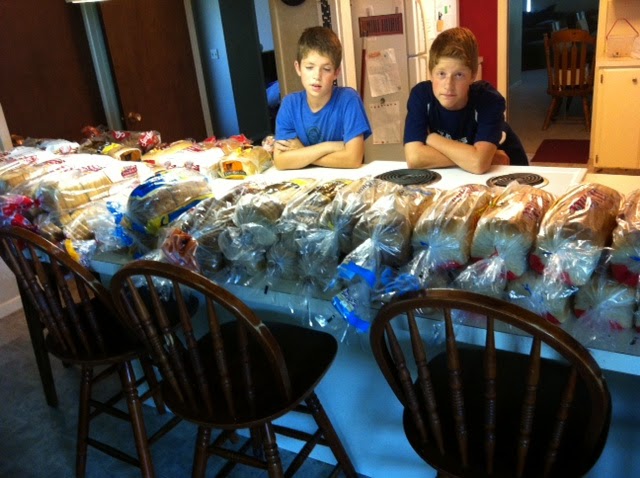 I called all my relatives and begged them to come get bread.  I sent the message out to all our neighbors.  I shoved bread into the hands of anyone who unwittingly came to the door.  I think people started crossing to the other side of the street rather than get too close to our house and have a loaf of old bread launched their direction.

Just for the record, I make good bread.  And even the best store-bought bread will never hold a candle to a loaf of fresh homemade bread hot from the oven.  And the homemade is so good for you!  And the store-bought is so not!  So I wasn't too happy too see so much of this inferior bread.  Am I turning into a bread snob?  Maybe.

Slowly, we went through all that bread.  It did come in handy when we moved within a few weeks and we weren't set up to make bread for about a month.  I breathed a big sigh of relief when we used up the last loaf of frozen marshmallowy-ness.

And then he went back to the used bread store.  <sigh>  He should not be allowed to go there unsupervised any more.
at February 04, 2015