I Must Have Done Something Good

I'll just start with this picture of what we had for dinner tonight, because it looks kind of fancy.  So many things went wrong with this meal that I have to  remind myself that it turned out alright,  in spite of my best efforts. 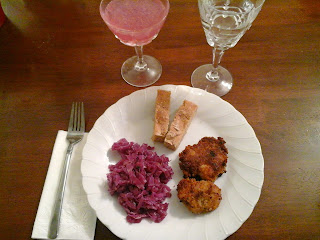 Yesterday was a day off school, and we had planned a Musical Monday.  Our musical for the week was The Sound of Music - all three hours of it.  For more fun, I had supplies to make rudimentary marionettes and puppets (from the Lonely Goatherd puppet show scene), and lots of yummy food.  My dad, being German himself, does not mind at all when I start to cook with a German accent!

For lunch we were to have bratwurst and round loaves of fresh, dark bread with cheese and apple beer (a meal my dad often ate during his mission to Germany).  At snack time, we had planned popcorn (because it's a movie, duh), and herbal tea with jam and bread (from "Do-Re-Mi").  Dinner was homemade red cabbage (because it's traditional and so yummy!), lemonade (that the Baroness was drinking on the porch), and schnitzel with noodles and crisp apple strudel (from "My Favorite Things").  And of course, we had to eat on our finest china (like the dinner scene where Maria makes the children cry).

We watched the movie, and it was fun.  Even the boys enjoyed it.  I first saw it when I was little - on Halloween when my folks took us to a movie instead of trick-or-treating.  We even had the album, just like this one.  It felt nice to be just sitting - in between making bread and slicing red cabbage.

As it turns out, I was feeling a little under the weather.  The bread didn't rise quickly enough, and then fell disappointingly.  As I started to make the red cabbage, I noticed that the recipe not only called for 3 hours of steeping, but also sitting overnight..  And then I learned that the breading on the schnitzel required an hour in the fridge before frying.  And I had a fever and a headache.  So we got hamburgers for dinner instead.  Hamburg isn't far from Austria, right?

We tried again the next night, when I was feeling a bit better.  But still, I forgot to make the noodles, and I couldn't find the apples for the strudel (they were hiding in the fridge).  Things never quite work out how I want them to.

As it turns out, David and Eddie helped me make the schnitzel, and it was tasty.  The bread was good, even if it was flat.  And the red cabbage was amazing after a day of sitting - at least I thought so.  The boys weren't fond of it.  Everyone liked the pink lemonade, and it looked downright festive in my mother's crystal goblets.  And I made a boxed German chocolate cake.  Done.

It wasn't the spread I had planned, but it worked out just fine and we all enjoyed it.  That's the important part, isn't it?  "Nothing comes from nothing - nothing ever could." It never would have turned out to be anything more than our usual pasta Monday if I hadn't tried for something different.  I didn't hit my goal, but I must have done something good.
at January 20, 2015