The chicken saga continues.  I had no idea that poultry could be so entertaining.  The boys have each chick named, and know their breed and personality.  I know that I need to check them a few times a day because they like to kick wood chips into their food and water.  It's the scratching instinct.  Good for birds, bad for people.  If I brought it up, I'm sure I would have boys doing the chicken scratch thing at the table during dinner.

I learned that feathers grow in all rolled up, and are called pin feathers.  They don't unfurl and fluff out until they are all the way grown.  In the meantime, the chicks look like they have a bad case of porcupine neck.  Or head.  It doesn't hurt them at all, but it's painful to watch how awkward-looking they get.  Talk about bad hair day!

I'm amazed at how fast they grow.  Here are our Easter Eggers, Pocket and Badger.  Pocket was a gray ball of fluff when we first got her, hence her full name, Pocket Lint.  My fabulous niece named these two for us.  (Hey Kristen!  Miss you!)  Eddie loves to hold them and take them outside to play. 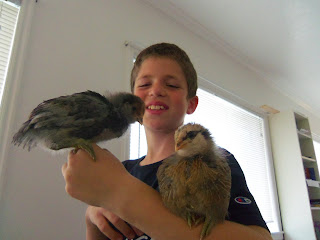 Badger is getting some colorful patterns on her back. 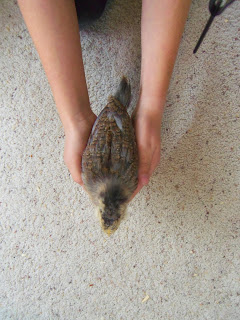 These are their "teenager" feathers.  They will molt again at 7-12 weeks, and then they will get their adult feathers.  Some of them will need new names at that time, as their coloring and overall look will be quite different.

They live in our sunroom now, in a plastic kiddie pool filled with pine shavings.  We stretched a tube of chicken wire around it to keep the flappers in, but even so one flew out today.  This is the cabin in the woods we are building for them. 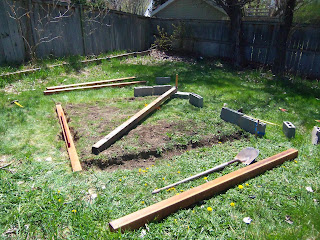 No, it changed since then.  Trent-the-man-from-a-long-line-of-bricklayers decided that the foundation needed to be cinder blocks.  Now it will be sturdy, like the third little pig's house. Hopefully that part will be done tomorrow and we can start framing.  Otherwise, we'll have chicken nuggets wandering around the house.