So we've been working on the chicken coop.  And we've been changing our minds again.  This is four major overhauls of the design so far.  I say so far because I'd be really surprised if there isn't another change.  Even though I'd like to just pick one.  And stick to it.  And get building already.

I've heard that building a house together can really strain a marriage relationship.  There are even vows you need to add to your marriage before embarking on a building project.  Any large undertaking can tax a struggling marriage - buying a new house, a new job, pregnancy, reunions, vacationing, children, breakfast...

Yeah, we've had a few struggles.  And we're just building a coop, for chickens' sake! 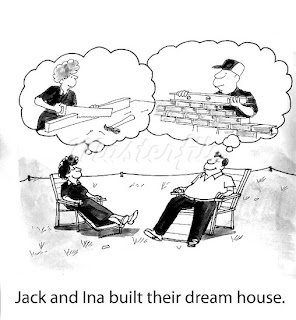 That about sums it up.

I wanted to just lay out 4x4s and build on that.  Trent built a sturdy foundation of two courses of cinder block.  I'd like the coop to have a lower profile and fit in the yard better.  He wants it to be a full eight feet - plus the peaked roof.  Sometimes when I've made a suggestion, he smiles and gives me the "that's nice honey but that's not how we're going to do it" look.  A year ago, that would have bothered me.  Actually, I would have been spitting nails.

But now (after a year of counseling!) we both smile and laugh a little.  I know that there is a particular way that he thinks is proper and right.  And I know that I don't have to cave in and and become a doormat when there is something I think is important.  His view count.  My views count, too.

But the most important view is the one that we see together, 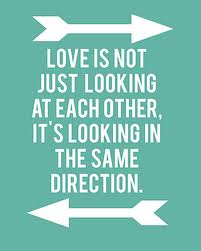 Sorry for the mushy.  I've just been glad that we can work together - and enjoy it!