When we moved last year - yes, it's been an entire year - we had two weeks to empty out a spacious house and move into a much smaller one.  Most of our stuff went into a storage garage that was literally packed to the ceiling with all our stuff.  What on earth could we have owned that took up that much space?  As a minimalist, I was quite disgusted with all of it. 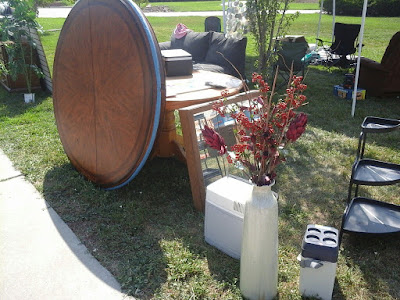 A good deal of it was large furniture items that we could not shoehorn into my dad's already-furnished house.  We planned to go through it the garage and clean it out, but it was just crammed in there too tightly packed too efficiently to be able to get anything out.  Finally, the day came when we were tired enough (me:of having so much STUFF! and him: of me complaining about it!) that we just had a garage sale.

We hauled load after load of furniture and big stuff from the garage out onto the lawn where passers-by could see it.  We set out signs and advertised.  We brought water and set up canopies so we could sit out there all day long.

The stuff slowly disappeared.  People drove by and slowed down.  An older man, on vacation from California, packed more things into his car than he would be able to drive back home.  A couple slowly talked down the price of a tandem bicycle they would ride together.  A group of college boys together carried away a heavy side table that they thought looked like a treasure chest.  A neighbor girl went home and back three times until she had found enough money to buy an old blue bike.  Women wheedled, babies cried, little children carefully counted their coins.

At the end of the day, we loaded up what didn't sell and took it to the thrift store dropoff.  We were a few hundred dollars richer and a few thousand pounds lighter. Whew.

I thought I'd be jumping-up-and-down happy to see it done.  I wasn't.  Glad to be done with it, yes.  Relieved, yes.  But it took more emotional energy than I counted on to let go of things I had loved.  I'd paid good money for that stuff - picked it out carefully and lovingly.  I wanted it!  And the memories attached to each piece were substantial.  The ghosts of happy family times pressed thickly on my sentimental heart.

I'm sad that I don't have room for some of those nice things, but I'm not willing to store them.  Maybe one day I'll have my own house again and I can pick out just what I want to put in it again.  Until then, I'll just have to see what I can do to make happy family memories today, with what I have now.
at September 16, 2015