Well, all has not been calm here on the eastern front of the Western Cape! To start things out, we had a baptism on Sunday, we have another two projected for two weeks out, loadshedding (scheduled power outages) is starting to really get on my nerves, and now I have two companions to enjoy all the fun with! 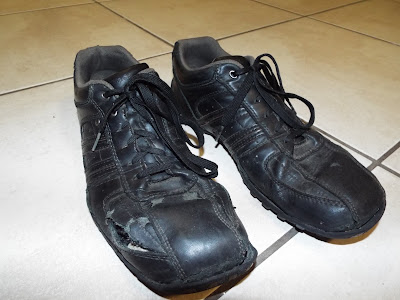 He just bought a new pair of shoes to replace these.  Good!

(My new companion) is from Antananarivo, Madagascar, so I'm learning the way of the Madagascans! So take that. I cant be in MDG, but MDG can come to me... Who need Fort Dauphin anyways? Paarl is where it is at. What more can you want? But seriously, Paarl is awesome despite all the things that drive me nuts about it. The ward here is awesome and really open to the missionaries, and they help us a ton to move the work forward.

Well, I'd love to give y'all a nice rundown of my new companion at this point, but I'm not going to lie... I don't really know him yet. We just got together like six hours ago, so next week you can expect an intense profile of him, hah. Anyway, we were expecting the new missionaries to come as the old ones left, but the old ones left Thursday morning, but the new ones didn't come until today. So Elder Tiu and I have been doing member splits in each of our areas every day until now. But now we're done with that, it's a big relief! I do think that the folks up in the office were just trying to be inconvenient as possible because when the new missionaries finally came, it was when we were planning to climb the big mountain... So we cancelled that for the second week in a row, haha. But next week for real!
at July 27, 2015