We got a phone call from the army boy this Sunday, which was good because He. Wrote.  No.  Letter.  This is an issue that may need to be addressed.  Don't you have to write home to your mother?  Oh well.  We got a phone call, anyway.

He said they have moved up from white phase to blue phase, which means they get about 2 hours of free time every day (that's more than I get!  Mumbling something about having time to write your mother).

He asked us to send toilet paper, because what they have there is nasty 1-ply scratchy stuff.

Another graduation requirement was a 16 K march, and they took care of that on Friday.  Other than that, they went on a 4 day, 3 night campout (bet he would have loved to sleep in our tent trailer!), has had lots of combat training, and his voice is hoarse from singing load while marching.

He said he misses home, and wants to eat dinner in a restaurant where he can just sit there and enjoy his food.  He'd like to be there for hours.  I've never known him to eat slowly; he's always been the king of the quick scarf.  But only having 10 minutes to eat makes you want to savor a bit. 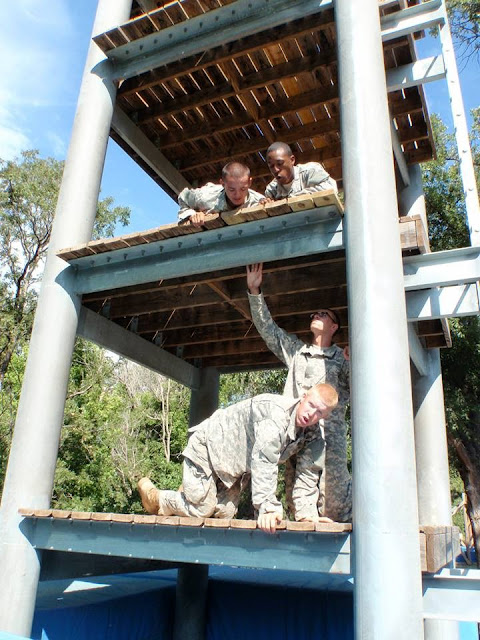 Here they are doing a drill where they have to get their whole group up this tower, without ropes.  It's hard to tell on this picture, but each platform of the tower is wider than the one lower, so they are not just climbing up, but out and up.  I guess he's the step stool, but he said they worked together and got it done quickly.  Go, boy, go!
at August 26, 2013