We like to go camping.  It's nice to be out in the beautiful world God made for us.  There's just something calming and fulfilling about sleeping under the stars that nothing else man-made can touch.  The last few years, we haven't gone.  It's a logistics nightmare to go camping with three toddlers, and that's all I am going to say about that.

But now that they are older, it's time to get back out.  They aren't old enough to really stay put, but nearly.  So we bought this: 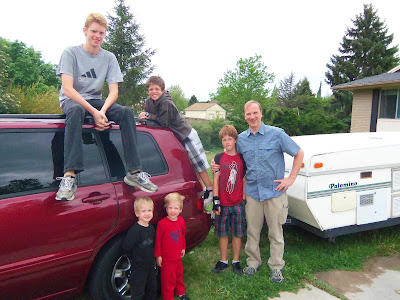 Its first excursion was a father-sons campout.  They were all excited to go (even Chris, who couldn't make it in the picture).  And they had a great time.  Except that it rained.  But they stayed dry, which they likely wouldn't have if they had been in a tent.  Actually, two tents.  Because we need to have a whole little city of tents to shelter us all.

But this puppy slept these six guys just fine.  And the next month, when we decided to go on a short road trip to the desert, it fit eight of us just fine.  And maybe it will even fit nine or ten of us.  But perhaps we ought to take a pup tent, just in case.  These boys keep growing on me.
at August 23, 2013