I'm tired.  I'm always tired.  Trent often invites me to stop and take a nap, but I can't.  I would get interrupted so many times that I would get grumpy and the attempt at sleep would be not only futile, but frustrating.  So I just ought to get to bed earlier.  That would mean I'd have to get the kidlets to bed earlier.  The thought makes me even more tired. 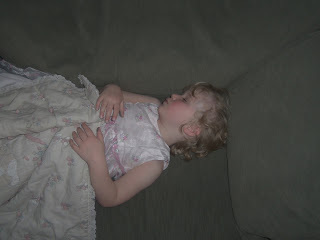 This is how bedtime goes down around here:

When the big kids were the little kids, 7:00 was pajama time.  The day was ending; we were beginning the bedtime routine.  By 7:30 we were brushing teeth and saying prayers and reading some scripture together.  Bedtime came quickly, all the small fry were tucked in, and Mama and Daddy had some grown-up time.  It was lovely.

As they got older, we kept to the same schedule, but only the littlest ones went to bed after family prayer.  The older kids got "lights on time," which was quiet, in-your-bed reading time.  "Lights on time" was longer for the older children, and shorter for the middle ones.  After getting the babies in bed, I would go through the children from younger to older, spending a few minutes with each one before "lights off time" meant they really had to go to sleep.  Took longer, but still worked well.

These days, it takes half an hour just to gather everyone in the same room.  It is like herding cats sometimes.  We still have family prayer together, but that is where the similarity to our former routines stop.  David and Eddie head downstairs to bed right after prayer, with Chris soon thereafter.  Trent and I start changing diapers and wiggling three toddlers into pajamas.  After a while, I hear giggling, then shouting, and I have to go downstairs and chase Chris out of David and Eddie's bedroom.  Back up to find the babies in the fridge.  Trent gets things set up in the kitchen, because he is the breakfast guy.

Later, I notice that the light in the family room is still on, and I try to convince Ben to quit reading and go to bed.  I repeat this every few minutes for the for the next 20, or until he has finished the book (he's a very fast reader).  I find the pink quilt that Gram made for Angel, and brush her teeth.  One twin is begging for toothpaste, so I brush both twin's teeth, whether they both want it or not (tooth brushing is sometimes easier when they are screaming with mouth wide open than when they are biting the brush, by the way).

I scold Chris for bothering his younger brothers again. pick up all the books Georgie just pulled out of the bookshelf, tell Angel it's time for bed ("I just want three more minutes, Mom.").  Pull Freddie off the kitchen counter, tell Angel she has two more minutes, find Alec playing computer games.  Turn the lights out for Ben, still reading, wonder why Trent has holed up in his office, holler at David to be quiet and go to sleep already!  Tell Angel yes, it is really time for bed, because it is dark outside.  She needs to go potty, have a little drink, be tucked in, have two stories, one song, and say her prayers.  She gets upset if we change the ritual.

I go back upstairs to only find one baby, happily playing with computer cords.  Say goodnight to Ben, tell Alec that it is really time to quit, and find the other little guy punching holes in a package with a push pin.  I sit on the couch and ask, "Milk?" and they come a-running.  This is our favorite time of the day.  I relax and nurse the babies, we snuggle until they get milk-drunk and drowsy.  Trent comes in and dims the lights, then helps me carry them to bed.  It's not unusual for a teenager to come sit by me and want to talk, and I oblige.  If I want to really connect with them, I have to do it when they want to - often later in the evening - and I love it. 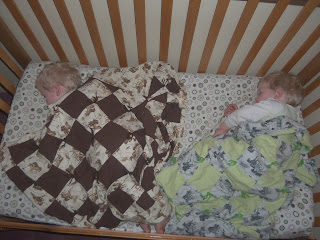 Then I should go to bed, but I don't.  Instead, I suddenly want to do big-person projects that I can't do with little ones underfoot.  I want to write about our day, organize pictures, pay bills
(ok, I really don't want to pay bills, but I often do it anyway), read the news, paint something, read just for fun...  And I go to bed late.  I ought to quit it, I really should.

Email ThisBlogThis!Share to TwitterShare to FacebookShare to Pinterest
Labels: family