In our house, the growth chart is called a measuring stick.  It's what we use, instead of the door jamb, to record how tall our kids are growing.  To me, it's a great part of family history, because I grew up with the marks on the door frame.  My brothers were forever competing to see how tall they were and how fast they were growing.  They are all between 6' 2" and 6'8" now, and we still measure off when we all get together.  And we nearly had fits when Mom wanted to paint the kitchen.  Fine.  But not the door jamb.  Not the measuring marks!

It did get painted, after we transferred all the marks to a long roll of paper.  But it's not the same.

Years ago, I decided (after seeing it done in a women's Relief Society crafting activity) to make my own record of my kids' growth.  We painted long boards and marked the measuring lines.  We lined up the boys and stuck on star stickers for their height.  They loved it, and we used it all the time to measure them and other tall things.  AND it moved with us.  Good thing too, because we moved (counting...) six times after that.  But we always hung up the measuring stick and marked off their height on their birthdays.  It was an important tradition.

When we moved to our current house, we didn't hang it up (technical difficulties).  And this week, something bad happened to it. 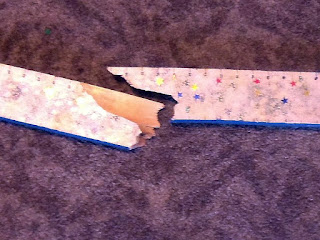 I know the kids aren't yet done growing, so I had to make me another one.  Besides, there really wasn't room on the old one to record all eight kids.  No, I'd rather not have eight boards.  Really.

I wanted it to be big, but pretty enough to hang in the kitchen.  No, not pretty.  Very little we do in a house full of menfolk is ever pretty.  But it needed to look nice.  Enough space for eight kidlets, and able to be used practically for measuring other things.  And portable, just in case we move again.  Me?  Picky? 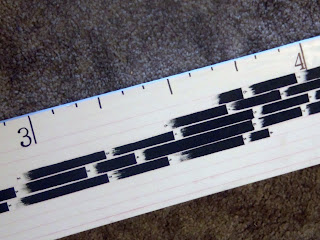 I found a perfect board in the garage.  It was primed white, so I didn't even paint it.  I cut off the end slightly, so it would fit in my not-quite-eight-foot kitchen.  I measured off the columns and marked them with another long board and a red pencil.  I like red in the kitchen.  This was the longest part of the whole project.  I marked off the inch lines and drew them with a marker.  I printed off the numbers, put where I wanted each one, and traced it with a pen, leaving a dent in the wood.  I traced and filled in the dents with marker.  Then I transferred the information from the old board. 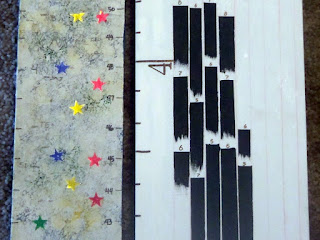 Alec and I spent some time trying to decide on how to mark the heights.  One idea was to give each child their own color, and the board would end up looking like a rainbow (crayons come in an eight-pack, you know!).  We experimented on the back of the board, and it looks very creative.  We settled on black and white, with a little gradient (and room to write the ages).

I like it.  I'm sad we've missed a couple of years of heights, and I'll have to call the doctor's office and see how much information I can squeeze from them.  I'll keep marking the kids' heights as they have their birthdays.  Most of them have a lot of growing to do.  Actually none of us are done growing.  We all have a lot of growth left in us yet.