When My Memory Fades

I forget things.  Not just because I'm getting older, but also because moments change.  When the house is a disaster and all the pennies need pinching and I'm hungry but there is nothing for me to eat and the kids are fighting with each other and we are LATE AGAIN! it is hard to remember that there are times that go well.  But there are good moments.  Lots of them, in fact.  So I need to write them down, because that's how I remember better.  I think that is one of the great blessings of the scriptures - they make our collective memories bigger.  And it's nice to remember the good things, especially when hard times hit. Alec came over to change his oil.  I have appreciated how Trent has taught the boys how to fix and maintain a car.  When Alec's new car spilled oil all over the driveway, Alec was good to come back and clean it up.  He stayed for a bit and we ended up all eating hamburgers in the kitchen together - 12 of us with Grandma Jeanne that day.  It so warms my mother-heart to be together.

We were driving home from a late-night family gathering in the big van.  I love being in our big van, even though I don't particularly like driving our giant, unwieldy van -  because it means we can be all together.  Something is missing when we have to take two or three cars instead.  Eddie started saying things in a British accent that evidently wasn't quite up to snuff.  Before long, David, Chris, and Ben were all criticizing  his attempt, but each fake accent was different than the one before.  I think we all ended up in giggles at all those bad accents.  British giggles, mind you. 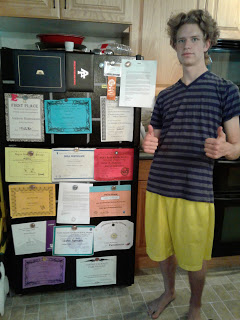 When someone does an especially good job on a school paper or artwork, we hang in on the refrigerator.  I was pleasantly surprised when Chris asked at the end of his senior year if he could put his well-done-paper one the fridge, since he usually does not like to be the center of attention.  The next time I walked past the kitchen, it looked like this!  It was so fun we left it that way, all covered with his awards and achievements, for the whole summer.