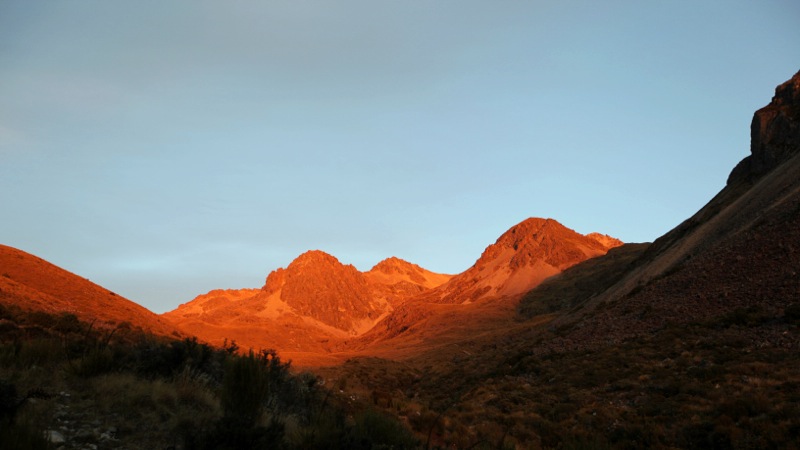 This isn't what our mountains look like in the morning.
Then again, maybe it is, but I usually have my eyes screwed too shut to notice.

Today I got up at oh-dark-hundred to make breakfast for Wave I.  Ben and Chris attend early-morning seminary before high school starts.  They like to begin their day with a dose of goodness.  I don't like getting up that early, but for me, "that early" extends until "you're still in bed?" for most people.  I get up when I have to, not when I want to.  Trent's alarm goes off, and he springs forth.  Most of the time I don't hear the alarm (he has the Hunger Games tune on his iPhone, and it's not blaring enough to kill my sleep), but Trent wakes me up.  He dashes, I stumble into the kitchen, and we do food.

Breakfast often looks like a dozen eggs and most of a loaf of bread, toasted.  Ben and Chris eat, brush their teeth, scrape the car windows if it is cold, and they're off.  We say goodbye to the First Wave, and then we go back to bed.  Sometimes Trent stays up, but I've never had enough sleep yet.

An hour later, we get up again for Wave II.  This one is shorter because David's lunch and breakfast are already made, and he is usually running late.  He runs through the kitchen, grabs his breakfast, munches while stuffing his Spiderman lunch box into his backpack, and dashes out.  The door slams behind him, and I usually go back to bed again.

After another hour of sleep, I am starting to feel human.  Time for Wave III.  Eddie is the most cheerful in the morning, and makes sure to feed and water the animals before walking to school.  I can always count on a kiss and hug before he goes.

Wave IV is the most leisurely, as I can make breakfast slowly for the little people and me.  Sometimes Trent eats with us, and sometimes he has already eaten earlier.  He gets ready and leaves for work, and we start our day.

Every morning I think I should get to bed earlier, but it's so hard with teens who stay up late and a husband who doesn't get home from work until later.  One day I might be a ball of sunshine in the morning, but not with this schedule.  At this rate, I'll be able to be cheerful for my children... when they don't live at home any more!